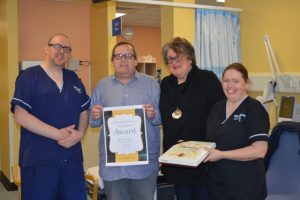 Cromer hospital is delighted to be celebrating a big milestone this week by treating its 1,000,000th patient. This celebration coincides with the 150th anniversary of the hospital opening in 1867.

Mark Smith, 58, from Trunch near North Walsham has been attending Cromer Hospital for just over two years to receive chemotherapy once a week and is the 1,000,000th patient. He said: “The care that I have received over the years has been so friendly and professional and everyone has always gone the extra mile in making sure that I am as relaxed as possible. They have made everything more manageable for my family and I can’t thank them enough.”

Mark added: “Cromer hospital is such an important part of the north Norfolk community and it’s fantastic that it is celebrating 150 years of providing care.”

Anita Martins, Matron of Cromer Hospital said: “It’s been a fantastic few years in the new hospital and we’re absolutely delighted to be celebrating Mark as our 1,000,000 patient!

“We’ve got so many amazing services on offer at Cromer, and it’s important to celebrate how important they are for our patients.”

Services at the hospital include an ophthalmic operating theatre, a permanent renal dialysis unit plus diagnostic services including a permanent on-site mammography (breast screening) service, a DEXA scanner for osteoporosis diagnosis and an MRI scanner.

Iain Young, Cromer Hospital Operational Manager said: “Cromer Hospital is such a cherished facility in the local community and this year we are thrilled to be celebrating both the 1,000,000th patient in the newly developed hospital, and the 150th anniversary!”

To highlight the 150th anniversary, Cromer Hospital will be holding a fete on June 24th from 10am-3pm. The activities on offer will include games, stalls, musical entertainment and a raffle. There will also be face painting and outside games for younger visitors.

Iain added: “The fete will be held on the Cromer Hospital site and we’re really looking forward to the day! It will be a great time to celebrate the 150 years of the hospital and we’re hoping to have as many people as possible celebrate with us.”

Mark Davies, NNUH Chief Executive said: “Cromer hospital provides such a fantastic service to its patients and we are delighted to be celebrating the 150th anniversary and patient number 1,000,000 this year. I want to thank all those teams at Cromer who provide such professional and dedicated patient care.”