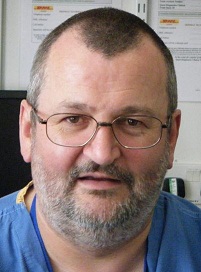 A Norfolk and Norwich University Hospital (NNUH) specialist nurse has been appointed as president of a national organisation which works to enhance skills and knowledge within operating theatre departments.

Adrian Jones, an Orthopaedic Surgical Care Practitioner within the Orthopaedic Department, has been elected to the role of president of the Association for Perioperative Practice (www.afpp.org.uk).

He said: “It’s a great honour to be elected to this role, representing the Trust and supporting other operating theatre staff nationally, in Europe and worldwide for the next two years.”

The organisation and registered charity AfPP has more than 7,000 members in the UK and was established in 1964. It aims to enhance the quality of care and patient safety in the NHS and the independent sector throughout the UK.

Adrian began his theatre nursing career in 1982 while serving in the Queen Alexandra’s Naval Nursing Service just as the Falklands War began.

In 1996, he returned to his home city’s Norfolk and Norwich University Hospital to become one of the first Orthopaedic Surgical Care Practitioners (SCP) in England – a registered non-medical practitioner who has completed a Royal College of Surgeons accredited programme (or other previously recognised course), working in clinical practice as a member of the extended surgical team, who performs surgical intervention, pre-operative care and post-operative care under the direction and supervision of a Consultant surgeon.

For more information about the AfPP is available at www.afpp.org.uk