A set of twins, born at 23 weeks and 6 days gestation, cared for by the Neonatal Intensive Care Unit (NICU) at the Norfolk and Norwich University Hospital have just returned home.

Esme and Iris Wilson were born more than 16 weeks early on 16th December 2016. The twins have spent 113 days on the Unit and returned home one day after their original due date of 7th April.

Mum Josie Wilson, from Norwich, came into the Delivery Suite at the hospital having felt uncomfortable. Upon examination, she was told that she was 5cm dilated and her babies were on their way. Iris arrived first, weighing just 660g. Fifteen minutes later, Esme was born weighing 630g. After a quick cuddle, the twins were transferred to the specialist services of the hospital’s NICU for monitoring.

“Seeing them for the first time in the incubator was surreal,” said Josie.

“The girls were both so tiny; we knew we had to be prepared for a tough journey ahead and it was going to be down to the girls to fight through.”

The NICU at NNUH is a Level 3 regional centre which cares for babies requiring the most complex care, supervision and treatments including surgery. Both girls have progressed well during their time on NICU, breastfeeding throughout which can often prove difficult due to the size of preterm and being twin babies.

Josie added: “We’ve overcome some big hurdles along the way; Iris was transferred to another hospital for laser eye surgery and the twins were both born with heart murmurs which are continuing to improve. It’s been an amazing journey and the expertise and support we’ve had from the team on NICU has been fantastic.”

Dr Priya Muthukumar, NNUH Consultant Neonatologist, named consultant for the twins and part of the team looking after them said: “This is a wonderful day for the family and our teams here at the hospital. Esme and Iris will be some of the shortest gestation twins in the region to have been treated and successfully returned home. When babies are born this early, they can face huge challenges in terms of their healthy development and it is testament to the strength of the family, the hard work and expertise of our professionals and wider advances in neonatal care that we can celebrate this superb milestone.

“We are very humbled by the strength and determination Josie has shown throughout these 113 days and are grateful to her for consenting to participate in research studies that are currently happening in the Unit.”

Both Esme and Iris were given a toy rabbit following their birth, at which time the rabbits were considerably larger. As the family prepare to return home, the girls have now outgrown their cuddly companions with Esme and Iris now weighing 5lb 7 and 5lb 4 respectively.

Thanking teams at the hospital, Josie said: “Everyone involved in the care of Esme and Iris has shown kindness and dedication, from the team who helped to deliver them, to the NICU staff who have been on this journey with us every step of the way. I’d like to offer them all my thanks.” 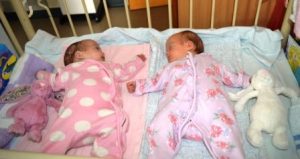