Starlight Storytellers Tour is just what the doctor ordered at NNUH

This spring, Starlight Children’s Foundation will bring a big dose of sunshine to poorly children at the Norfolk and Norwich University Hospital when its Storytellers Tour pays a visit on Tuesday 2nd May at 3pm.

Starlight is national charity that grants wishes for seriously and terminally ill children and provides entertainment in hospitals and hospices across the UK. The eight-week long Starlight Storytellers Tour will visit 92 children’s wards across the country.

Now in its fourth year, the Starlight Storytellers Tour stories have been produced exclusively for Starlight by The Panto Company who will perform The Three Little Pigs, The Three Musketeers and The Princess and the Pea. Fully interactive, these adaptations of the well-loved children’s classics are full of fun and young patients will get to laugh and cheer as the four actors sing, dance and perform for them, their families and the staff.

Emma Dolman, Matron for Jenny Lind Children’s Services at NNUH said, “We use play to help distract children from the pain and anxiety that they might be feeling because of their illness and there’s nothing like a good story to capture a child’s imagination. The children are always very excited ahead of a visit from the Starlight Storytellers Tour and we are very grateful to Starlight for providing the opportunity for our young patients to forget their illness for a short while and simply have some fun.”

Every year, Starlight provides entertainment and distraction to over half a million poorly children and the Starlight Storytellers Tour will give thousands of sick children the chance to escape their illness and enter the magical world of storytelling, all from the safety of the hospital ward.

Neil Swan, Chief Executive of Starlight Children’s Foundation, said, “All of Starlight’s activities are aimed at distracting children from the pain and anxiety that they might be feeling because of their illness. We’re delighted to be able to bring storytelling and fun to poorly children and we hope that the stories will be just what the doctor ordered!” 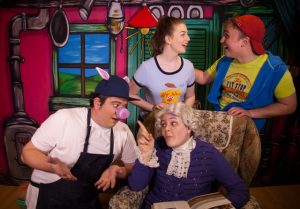