Meet FatManTrim: The Thetford man who has lost more than 10 stone 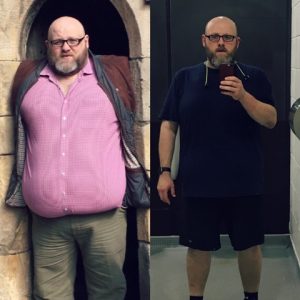 Having enjoyed a promising rugby career in his early 20s, Leigh was plagued by a series of injuries which left him unable to keep playing. A lack of exercise and a fondness for sweet treats and exotic cheeses meant that Leigh began to pile on the pounds.

Some half-hearted attempts at increasing his activity levels and keeping a watch on his eating proved unsuccessful for Leigh.

“I just wasn’t really ready to change,” he said. “We all know the equation which helps you to lose weight, but sometimes we take for granted the massive changes in lifestyle that you need to put into effect to make this happen.”

Leigh’s daughter Maisie was born in August 2013. As she grew and became more active, Leigh’s expanding waistline was brought into sharper focus.

“My joints were painful, particularly my knees and I was struggling to do normal activities with my daughter without getting out of breath,” said Leigh. “It was at that point that I knew something really had to change.”

Leigh booked an appointment with his GP to discuss his options for weight loss, considering bariatric surgery and other weight related health services. Leigh was referred to the weight management clinic at the Norfolk and Norwich University Hospital and entered the programme in April 2016.

The weight management programme helps individuals with weight issues to identify their psychological barriers, address their medical problems and provides support for changing their behaviour towards a healthier lifestyle.

In addition, some individuals will undergo a period of an initial intensive weight loss plan involving a low calorie liquid diet, supplemented with vitamins and fibre. The team monitor and support patients’ overall progress not only in terms of weight loss but also associated health issues and psychological wellbeing.

For Leigh, this meant a largely liquid diet for the first 12 weeks of the programme. He was then able to gradually introduced home-cooked, freshly prepared meals to his diet.

Leigh’s family supported him on his weight-loss journey by clearing the house of treats and preparing batches of meals when he was out of the house. Alongside the extreme changes to his diet, Leigh embarked upon a challenging exercise regime involving swimming, resistance training and spin classes.

One year on and having lost a staggering 67kgs, Leigh is delighted with his progress and credits the weight management clinic with being an excellent source of encouragement.

Leigh said: “The team at the hospital have been fantastic and I ‘m not sure where I’d be now without their motivation. It’s definitely a no nonsense, no compromise programme but with support from the team I never doubted that we’d get to a positive outcome.”

Dr Khin Swe Myint, Consultant Physician for diabetes and endocrinology who runs the service and is the co-chair of the Norfolk Obesity Network, said: “In our clinics, it is not unusual to see patients shedding a few tears in the first consultation. Participants in the programme may have struggled to lose weight for many years and some have very poor quality of life physically as well as psychologically.

“Obesity is a complex, long-term condition and it is very important as health care professionals, that we listen and understand the root cause of problems. It is very much a team effort to run the service successfully and I am delighted that our work has been acknowledged as a Centre for Obesity Management in the UK by the Association for the Study of Obesity.

“All credit to Leigh for his hard work and determination in moving towards a healthier lifestyle. Individuals must be in the right mind-set and ready to make changes for the programme to work.

“Leigh has worked hard to fulfil the demands of the programme and this is evident in his great story. Losing this amount of weight is by no means easy and I’d like to congratulate him and encourage him to continue with the positive changes he has made.”