A breakthrough new drug treatment has been developed to help premature babies with breathing problems. Three babies born at the Norfolk and Norwich University Hospital (NNUH) took part in a clinical trial in 2014, which was the first time a new synthetic lung medicine had been used in human babies.

Emily Kearey was one of twins born 12 weeks prematurely in November 2014. Emily weighed only 1lb 13oz whereas her sister Sophie weighed 3lb 3oz. They were delivered by Caesarean section after it was discovered that they had developed twin-to-twin transfusion syndrome.

Six hours after birth, Emily had increasing difficulty breathing, due to respiratory distress syndrome (RDS), a life-threatening condition that affects many premature babies due to immature lungs and a lack of surfactant. Surfactant is a naturally-occurring substance which coats the tiny lung sacs, known as alveoli, and prevents the lungs collapsing at the end of each breath. Premature babies with RDS often need to be given extra surfactant down a breathing tube. The surfactant currently used in most neonatal units is sourced from the lungs of pigs.

At the time of Emily’s birth, the Neonatal Intensive Care Unit (NICU) at NNUH was part of an international clinical trial investigating the newly-developed synthetic surfactant “CH5633”. The sponsor of the study, Chiesi Farmaceutici S.p.A., developed the new surfactant to be as close as possible to the naturally-occurring surfactant found in healthy human lungs, and also to provide an attractive alternative to surfactant obtained from the lungs of pigs. While this new surfactant had already been extensively studied in animals, this study was the first time it had ever been tested in humans.

Emily’s parents were given the opportunity to let her join the study and agreed to participate. At just six hours of age she received the new surfactant treatment directly into her lungs. Emily had a very good response to the test surfactant, which eased her breathing difficulties. Along with her twin sister, Emily then spent a further two weeks on the NICU at NNUH before being transferred back to their local hospital in Colchester prior to discharge home.

Emily’s father, Dr Roger Kearey, who works as an out of hours GP, said: “Working in healthcare we knew a little bit about clinical research and were happy for Emily to go into the study, but it was still a daunting decision to make. We had complete trust in the doctors and were confident that we had been provided with all the information necessary to make our decision.”

NNUH was one of only 12 centres across Europe that recruited babies to this landmark trial. A total of 40 babies were recruited to the study and Emily was the very last baby to participate.

Two years after taking part in the study Emily is a lively toddler who has reached all the expected developmental milestones for her age. Her parents are pleased to have helped with the study.

Roger added: “It was important for us to take part in this study, for Emily first and foremost, but also because we knew that this could help premature babies with similar difficulties in the future. We received brilliant care from the team at NNUH and are grateful for their expertise and support.”

The trial was led by Dr David Sweet, Chief Investigator for the study and consultant neonatologist at the Royal Maternity Hospital in Belfast. The findings of the trial, which took place in 2013-14, were recently published in the medical journal Archives of Disease in Childhood.

Dr Sweet said: “This important study has shown that the new synthetic surfactant CH5633 appears safe for use in premature babies and looks to be a promising new treatment when they have breathing difficulties. Our study paved the way for a much larger study now underway which is continuing to evaluate the effectiveness of CH5633. If this larger study confirms it to be an effective treatment, we hope it will eventually be made widely available to treat future premature babies born with breathing difficulties.”

Dr Paul Clarke, Consultant Neonatologist and Principal Investigator for the study at NNUH said: “Taking part in trials of this nature enhances our international reputation as a leading centre for helping in the development of innovative treatments for sick and premature babies. We are most grateful to Emily and her parents for allowing her to participate, and also thank the other families whose babies joined the study.”

Mr Peter Chapman, NNUH Medical Director said: “Our research teams across the hospital work hard to ensure we are at the forefront of advancements in treatments for patients. This first in human study on our Neonatal Unit is a fantastic example of this and helps to cement our position as a leading hospital for participation in research.” 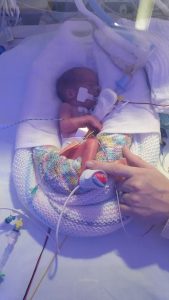 Emily Kearey on the day she was born 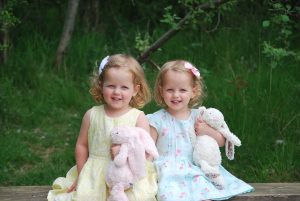