Teams at the Norfolk and Norwich University Hospital are designing innovative patient pathways which are helping to reduce the time to diagnosis for a little-known chronic back condition.

Axial Spondyloarthritis (AS) is a condition which causes severe spinal pain due to inflammation and structural damage. It affects approximately one in 200 people in the UK and usually begins in late teens or early adult life. Many patients also experience arthritis in other areas, typically the hips, knees and feet, and there is a strong genetic link which is associated with the HLA-B27 gene.

As over 20% of adults in the UK suffer from chronic back pain, it can be challenging to identify AS patients from this pool and the average time to diagnosis of the condition is around eight to ten years.

As understanding of the condition develops, clinicians are making links between combinations of symptoms indicative of Ankylosing Spondylitis. Eye inflammation (anterior uveitis) affects up to 40% of patients with AS and may indeed be one of the first features of the condition. Other related symptoms can include tendon problems and inflammation of other organs including the bowels and skin.

Dr Karl Gaffney, Consultant Rheumatologist at NNUH said: “We are very proud of the services we offer AS patients in Norfolk and consider that we are making a real difference to their lives.

“We are at the forefront of clinical research in collaboration with many national and international centres of excellence and have developed an extensive clinical trials programme which enables patients to have access to new therapies long before they come to market.”

An innovative research project which sought to explore the relationship between eye disease and arthritis has changed the life of a woman from Holt.

Carol Weyman had suffered from back pain for more than 20 years. She had been living in London and working in a stressful job in the City. Although Carol had been to see her GP on many occasions about her ongoing pain, she had only been offered painkillers and no further investigations were undertaken. She arranged private physiotherapy, osteopathy and acupuncture but none of these treatments helped Carol in the long-term.

When her husband retired from the Metropolitan Police three years ago, Carol and her family decided to find a quieter life in Norfolk. Having moved to Holt, and despite the slower pace of living in rural Norfolk, Carol’s back pain became increasingly severe.
On many occasions, Carol woke up in the middle of the night in extreme pain.

“It had got so bad that we called the 111 service, who referred us to the out-of-hours GP service and I was prescribed Tramadol and Diclofenac,” said Carol.  “By this point I was getting so frustrated and couldn’t help feeling that life wasn’t going to get better.”

Carol had also experienced episodes of sensitivity to light and blurred vision. An eye hospital in London had diagnosed this as recurrent uveitis, an inflammation of the middle layer of the eye causing pain, sensitivity and poor vision. Having moved to Norfolk, Carol’s uveitis resurfaced and she was referred to the eye clinic at NNUH.

At her eye clinic appointment, Carol was asked if she had experienced back problems and whether she was interested in participating in research.

“Of course, I said yes,” said Carol, “and a little seed of hope was planted in my mind that someone might finally be able to help and identify what had been going on all this time.”

Close links between the ophthalmology and rheumatology departments at NNUH meant that Carol’s symptoms were identified as being suggestive of AS. She was sent for further tests which showed that she was positive for the HLA-B27 gene and an MRI showed widespread inflammation of the spine. In fact, Carol was one of 17 patients from 73 referred via the study who were identified as having AS. These patients had been suffering from back pain for an average duration of 20 years but none of them were aware they had AS.

An ongoing campaign, led by the National Ankylosing Spondylitis society (NASS), called ‘Back Pain Plus’ had also been running in parallel seeking to raise awareness of the combinations of symptoms which could be indicative of the condition. This includes back pain with uveitis, as in Carol’s case, however there are also other campaigns highlighting back pain and its links with colitis and psoriasis.
After a 20 year search for an explanation for her back pain, Carol is relieved to have found an answer.

She said: “Just to know what’s going on and why I’ve been feeling like this has helped enormously. It finally feels like we’re on the road to positive progress.”

Dr Karl Gaffney, Consultant Rheumatologist at NNUH added: “Carol’s story is so typical of what we hear from patients – enduring years of pain, not being investigated appropriately, concerns about being believed, the delight at having an explanation for symptoms and being able to understand the condition. Early diagnosis is so important as there are very effective new treatments which work best in early disease. The benefits and importance of collaboration between different specialties within our hospital are also highlighted by Carol’s experience.”

Carol has recently started a new biological treatment which is self-administered as a fortnightly injection.

Carol said: “The new treatment has been working its magic and I feel better than I have done in years. It’s still early days, but I’m very hopeful that this progress will continue and I can enjoy a normal and fulfilled life with my family. The team at NNUH have changed my life for the better and I’m truly grateful to have benefited from their unrivalled expertise.”

Carole is passionate about raising awareness of AS and has recently given presentations to junior doctor forums on the subject.
She added: “It has been great to finally get a diagnosis but it’s been a long journey. If I can help even one more person reach their destination a little quicker by sharing my experiences, that would be a great achievement.”

In late 2013, at the age of only 23, Lloyd Chafer was experiencing severe back pain and was becoming increasingly lethargic.

During a consultation with an orthopaedic specialist, Lloyd had an MRI scan which proved inconclusive in terms of identifying the reason for his back pain. Upon discussion of his symptoms Lloyd’s consultant suggested that AS should be considered and he was referred to Dr Karl Gaffney, Consultant Rheumatologist at NNUH for further tests.

Blood samples and a more detailed MRI scan of the whole back provided a positive diagnosis for AS. Unlike many others, only six weeks after his first appointment to investigate the cause of his back pain, Lloyd’s AS had been successfully diagnosed and he was prescribed a course of anti-inflammatory medication.

“It was good to know what was happening and that there was a specific reason for my back pain,” said Lloyd. “To know that I had an inflammatory condition was difficult to accept however the fact that we had identified it early meant that we could discuss the best treatment options for the future.”

By June 2014, despite being prescribed a course of anti-inflammatory medication, Lloyd’s symptoms were worsening and simple tasks like getting out of bed and getting into the car had become challenging.
Having contacted the rheumatology team at NNUH to discuss his symptoms, Lloyd was presented with an opportunity to participate in a clinical trial at the hospital. The trial was investigating a new treatment for AS which had not yet been licenced.

“You hear medical trial and you think about things going on in a laboratory,” said Lloyd. “But once I’d discussed with the team what the trial actually involved and what would be expected of me, I realised that this might be a great opportunity to help myself feel better for the future and to potentially help others suffering from AS.”

“I was holding on to doorframes to help me walk from my bedroom to the shower,” said Lloyd. “My foot had swollen and normal activities were difficult; it was only after 20 minutes in a hot shower that movement began to get easier.”

The trial involved a fortnightly injection into Lloyd’s thigh which was administered at the hospital. Once he became familiar with the process, Lloyd was able to inject himself at home.

“Within six weeks, I was back to my old self,” said Lloyd. “I realised I hadn’t felt this good for at least 18 months and mentally it gave me such a lift.”

The trial lasted for a total of 18 months, throughout which Lloyd continued to respond extremely well to the treatment being tested. Although the medication had not yet been licensed or funded to be provided on the NHS, given his positive progress, the pharmaceutical company agreed to continue to supply Lloyd with the treatment. This treatment is now licenced and available for Lloyd to continue his treatment on a long-term basis.

Lloyd added: “This process has made such a difference to my daily life; I understand that people are wary when they are first approached about a trial, but if I’d have known about the positive impact it would have on my life, I wouldn’t have hesitated for a second.

“I’m really grateful for the opportunity provided by the team at NNUH, it was a completely life changing journey. I know that AS is not something that’s going to go away but now I can just forget about it because it doesn’t affect my daily life.”

Helene Woodhouse, Clinical Research Nurse in Rheumatology at NNUH said: “We’re delighted by Lloyd’s progress and the positive experience he has had. At NNUH we’re committed to providing the best possible care and the latest treatments in a structured way. Lloyd’s story highlights the real difference this can make to people’s lives.”

Lloyd’s journey has inspired him to raise awareness of the condition for the benefit of others and he is now a member of the National Ankylosing Spondylitis Society.

Thanking the NNUH rheumatology team, Lloyd said: “The work of Dr Gaffney and his team and their commitment to finding the best treatment for their patients is unparalleled. I can’t sing their praises enough.” 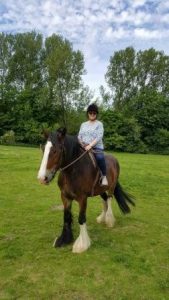 for the first time in 20 years