A Paediatric Anaesthetist at the Norfolk and Norwich University Hospital has been presented with a prestigious award.

Dr Kathy Wilkinson, a Consultant at NNUH has been awarded an honorary membership of the Association of Paediatric Anaesthetists of Great Britain and Ireland (APAGBI).

The Association was formed in 1973 by a small group of Paediatric Anaesthetists and aims to promote high standards in the specialty through education and research. The organisation also advises other professional bodies and draws members from every type of hospital in the UK and Ireland.

One of the first and most renowned members of the association was Philip Ayre, an anaesthetist from Newcastle who invented an essential piece of anaesthetic equipment, the ‘T-piece’ breathing system, which is commonly used for paediatric patients undergoing cleft palate repair or intracranial surgery.

Dr Wilkinson began her career with joint training in anaesthesia and paediatrics. She worked at Great Ormond Street Hospital and the Royal London, before spending a year in Melbourne as a Clinical Fellow in Paediatric Intensive Care.

She returned to the UK to take up a consultant post at Great Ormond Street in Paediatric Anaesthesia and Critical Care. During her tenure, the unit established the practice of retrieval of sick babies and children which subsequently evolved into the London based Children’s Ambulance Transfer Service (CATS) which safely moves very sick children from all over East Anglia as well as North Thames to Paediatric critical care units.

Dr Wilkinson joined NNUH in 1995 and was elected to the council of the Association of Paediatric Anaesthetists in 2000 as its first member from a small paediatric centre. During her time as secretary of the organisation, its membership grew fourfold to its current level of over 1000 members and in 2011 Dr Wilkinson was elected President of APAGBI, a role she held for two years.

Outside of the Association, Dr Wilkinson is a paediatric advisor to the Royal College of Anaesthetists and co-authored the Guidelines for the Provision of Anaesthetic Services (GPAS) until 2016. In 2017, she was asked to join the NHS England national review of paediatric surgery and intensive care.

Kathy said: “I’m honoured to have been invited to become part of the eminent group of APA honorary members. Our specialty has grown considerably over the past 30 years and I’ve been privileged to have been a part of its development over that period.

“I’m particularly proud of the relationships that we have built with other specialties, and the services which we deliver together for our local patients. We have a fantastic team in Norwich and I hope that we continue to go from strength to strength.”

Congratulating Dr Wilkinson, Jo Segasby, Divisional Operational Director for Surgery, said: “This is a wonderful and much deserved accolade for Kathy. She has been involved in a variety of projects which have been instrumental in advancing anaesthetic services for the benefit of young patients and we are delighted to have her skills and expertise at NNUH.”

The team of paediatric anaesthetists at NNUH provide perioperative care for young patients ranging from neonates, infants less than four weeks old, through to adolescents less than 16 years of age. The department has grown considerably in recent years and cares for more than 3,000 patients each year, working closely alongside surgical and theatre colleagues. 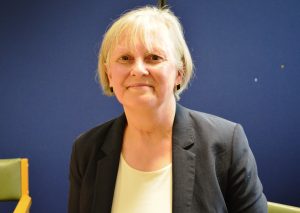