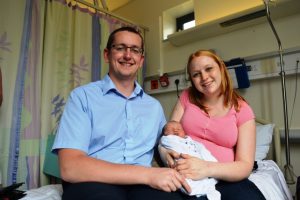 The Norfolk and Norwich University Hospital will be the first in the region to offer a new choice of pain relief for women in labour.

Remifentanil is a potent, very short-acting drug which can be used as an alternative to Pethidine. With Remifentanil Patient Controlled Analgesia (PCA) women in labour can control when and how much pain relief they receive, by pressing a button. The button is connected to a specifically designed pump which will deliver a small dose of pain relief. Unlike Pethidine, Remifentanil does not accumulate in mother or baby and breastfeeding is not affected.

Remifentanil PCA will be available to women giving birth within the hospital’s Delivery Suite.

The hospital took part in the national RESPITE trial between December 2014 and September 2016, recruiting 16 patients to participate. The trial sought to investigate the proportion of women, who having had either Remifentanil PCA or Pethidine during their labour, went on to require an epidural.

This research was published last month and showed that 50% less people who have Remifentanil go on to have an epidural than those who have had Pethidine. There was also a significant reduction in the number of women who needed an instrumental delivery (Forceps or Ventouse). Research has shown that pain scores are lower and maternal satisfaction is higher with Remifentanil when compared with Pethidine.

Janay Heavey, from Queen’s Hills in Norwich gave birth to her son Bobbie Alexander Heavey on 22nd June, having been initially induced two days previously. Janay selected Remifentanil as her preferred form of pain relief knowing that she didn’t want an epidural or Pethidine.

“It was great to be able to control the pain relief I had; it really was as simple as pressing a button,” said Janay. “After you had pressed the button to deliver some relief, the button would go red for two minutes until you could then press the device again. Having my family helping me countdown during contractions until more relief was available was really encouraging.”

Janay, 29, used gas and air throughout the labour for additional pain relief and also used Remifentanil during the pushing part of her labour.
She said: “I would definitely recommend Remifentanil PCA. It gave me lots of flexibility, comfort and the confidence that I was in control of the pain of my labour. I’d definitely use this as an option if we decided to have more children.”

Janay’s mum Erica, who was present during her labour, added: “It was like a miracle thing! They certainly didn’t have anything like that when I was in labour but if they had, I’d have jumped at the chance to use it.”

Sophie Kelly, from Long Stratton, also took advantage of the newly-offered pain relief during the labour of her daughter Florence, who was born on the 8th June.

Sophie, 23, said: “I’d first read about Remifentanil as an option for pain relief at one of my clinic appointments. I knew that I didn’t want an epidural due to a pre-existing back problem, so thought that this might be a good option for me.”

Sophie’s labour lasted around 3 hours and she was pleased with the positive impact of being able to control when pain relief was administered.

“I was so relaxed throughout my labour and I think this was, in large part, due to being able to control my pain so easily and the fast-acting nature of the relief. I’m sure that how comfortable I felt contributed to the speed at which my labour progressed.”

Sophie added: “It was so calm in the room; we could have even had our two year-old daughter, Darcy, with us!”

Dr Jeremy Corfe, Consultant Anaesthetist at NNUH said: “This is a fantastic expansion in the range of pain relief options we can offer expectant mothers during labour. We know from having taken part in previous studies that patients enjoy the fact that they can control their pain relief themselves and that its effects wear off very quickly so it doesn’t cause any problems with the baby. It’s a fantastic alternative for those women who don’t want to have Pethidine and who also don’t necessarily want an epidural.”

Frances Bolger, NNUH Head of Midwifery said: “We’re excited to be the first maternity unit in the East of England to offer this new service to women in labour. At NNUH we pride ourselves on providing excellent maternity care which gives expectant mothers a range of choices with regards to their birthing experience.”

More information on Remifentanil PCA and the range of other pain relief options in labour can be provided by your midwife.