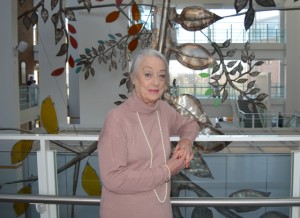 “I feel like if I just imagine myself somewhere lovely and sunny I can forget the fact that I’m absolutely terrified of heights!” explains 70-year-old Jenny Holland who will be taking on an extreme wing walk to raise funds for the Norfolk and Norwich University Hospital charity.

She will be secured standing up on the top wing of a 1940s Boeing Stearman Biplane and flown around at speeds of up to 135mph. The trip, which is taking off from Damyns Aerodrome in Upminster, Essex, will involve a variety of flypasts and manoeuvres, including a terrifying drop dive of 500ft.

Jenny said: “I have been psyching myself up over the past few months, and can’t believe the big day is just around the corner! It’s a daunting challenge but it’s all for a fantastic cause. The eye clinic, specifically Mr Glenn, has been amazing to me over the years and I just wanted to say thank you and to give something back to the Trust.”

So far, Jenny has raised a massive £10,000 but is still looking for more people to get behind her fantastic fundraising efforts. Jenny said: “I’m determined to raise enough money for a special operating chair for intravitreal injection patients at the NNUH eye clinic, which costs £12,000. Any support would be truly appreciated.”

Mr Andy Glenn, Consultant in Ophthalmology at NNUH said: “We are overwhelmed with Jenny’s support to the unit. She has already completed the London Marathon and a parachute jump for us but this is definitely her biggest challenge to date. We are so pleased to have inspired this support to the charity.’’

Louise Cook, NNUH Fundraising Manager said: “Jenny has spent months preparing for her wing walk and now that the day is just around the corner, I do hope as many people as possible support her challenge. We are so grateful for her inspiring dedication to raise money for the eye clinic and to raise awareness of the hospital charity.”

If you would like to support Jenny with her wing walking challenge, please visit her JustGiving page: https://www.justgiving.com/fundraising/jenny-holland or contact NNUH Fundraising Manager, Louise Cook on fundraising@nnuh.nhs.uk

Jenny’s wing walk will be taking place on Sunday 23rd July at Damyns Aerodrome, Upminster, Essex at 11.30am. Any media interested in covering the day, please contact the NNUH Media and Communications team on 01603 289943.