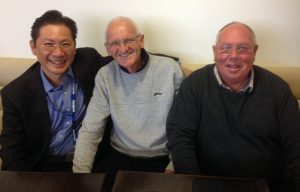 The Oesophago-Gastric Cancer department at the Norfolk and Norwich University Hospital (NNUH) has been chosen as Norfolk and Suffolk Youth Football League’s charity of the year.

Proceeds from events taking place throughout the year will go to the department which is rated as one of the top in the UK for treating Oesophago-Gastric Cancer.

The hospital charity and the initiative has received the backing of former Northern Ireland international footballer and Norwich City Academy Director Sammy Morgan.

The Oesophago-Gastric Cancer fund, which is part of the hospital charity, is close to his heart after he was treated at the department when he was diagnosed with stomach cancer in 2014.

He said: “I underwent chemotherapy for six months and a full gastrectomy in January 2015 and was under the care of Consultants Edward Cheong and Bhaskar Kumar.

“Because of the wonderful care, compassion and expertise of the dedicated staff at the NNUH, I am trying to give something back in return.”

He said: “I formed a close bond with Mr Cheong and Mr Kumar and his staff during my illness and, as we share a great passion for football, it has been a natural direction for me to seek ways in which to raise awareness of this type of cancer and also to attract some funding to support the tremendous work being carried out at both the NNUH and James Paget Hospital.”

John Pitts, President of the Youth Football League, and League Chairman Shaun Platten said the hospital charity was chosen following the league’s long-standing relationship with Mr Morgan and in recognition of his battle with cancer.”

The league was founded in 1982 and is made up of 30 football clubs affiliated to either Norfolk or Suffolk County FA consisting of 250 teams of 4,000 children from under sevens up to 16 years old.

NNUH Consultant Surgeon Edward Cheong said: “We are delighted that the Youth Football League has chosen our department fund to benefit over the year and we hope that, as well as raising funds, we can help raise awareness of this type of cancer.

“Oesophageal cancer is a very aggressive cancer that affects the gullet and it is vital that it is caught early when treatments are more likely to be effective.

“Many patients ignore the symptoms such as persistent indigestion, acid reflux and difficulty swallowing – we hope we can encourage people to be aware of symptoms and seek medical advice at an early stage.”

The incidence of oesophageal cancer has risen by 500% in the past four decades due to obesity, smoking and poor diet and lifestyles.

This is rising faster than any other cancer in the western world and Norfolk has the fifth highest incidence of oesophageal cancer in UK.

Earlier this year a “blow your whistle” awareness day was held at NNUH involving patients who have survived oesophageal cancer.

The aim of the event was to encourage whistles to be blown at all sporting events so that it becomes an established way to raise awareness for oesophageal cancer.

NNUH is rated as one of the top units in the country for treating Oesophago-Gastric Cancer and one of the few units in Europe to perform minimally invasive oesophagectomy where the entire operation is done by keyhole surgery (laparoscopic and thoracoscopic oesophagectomy).

The keyhole or laparoscopic surgery is less traumatic to the body allowing the patient to recover from a major complex cancer operation is significantly faster.

If you would like to support Oesophago-Gastric Cancer fund or any part of the hospital charity we would love to hear from you. Please contact Fundraising Manager Louise Cook on 01603 287107 or via louise.cook@nnuh.nhs.uk