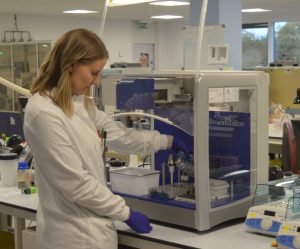 Patients in Norfolk‘s three acute hospitals and community health services are the first in the region to benefit from new technology, installed by the Eastern Pathology Alliance, which will diagnose gut infections by detecting fractions of DNA rather than growing samples in a petri dish.

Dr Ngozi Elumogo, Director of Infection Prevention and Control at the Norfolk and Norwich University Hospital, said: “The molecular diagnosis machine will carry out a quicker, more sensitive test, identifying a wider range of pathogens.

“It will enable us to provide a next day diagnosis for patients, speeding up their treatment, when previously it would take about five days to grow a culture in the laboratory.

“The new machine is much more sensitive and will detect minute elements of DNA when some bacterial infections may not have shown up using traditional laboratory methods. It is a step change in the way diagnosis is made for gut infections such as Salmonella, Campylobacter, and C. diff. We are delighted to be the first hospital in the region to be making use of this technology.”

Richard Parker, Chief Operating Officer at NNUH, said: “This is a major investment in new technology which will bring great benefit to patients in terms of quicker diagnosis and treatment, and ultimately a shorter length of stay in hospital.”

The molecular diagnosis machine costs £100,000 and comes in two parts, one machine which prepares the faecal material to be tested and another which analyses the strands of DNA in the sample. It is being used by the Microbiology Team in the Eastern Pathology Alliance based in the Innovation Centre on Norwich Research Park.