Every day in the UK, 11 women will die from ovarian cancer and during Ovarian Cancer Awareness month in March the Norfolk and Norwich University Hospital is hoping to raise awareness of the symptoms.

Around 7,400 women are diagnosed with ovarian cancer in the UK each year, making it the 6th most common cancer in women.

More than half of ovarian cancers in the UK are diagnosed in women over the age of 65. The risk factors include a history of ovarian or breast cancer in the family, inherited faulty genes, and having had breast cancer before.

The symptoms associated with ovarian cancer are often very vague which means 55-60% of women are diagnosed once the cancer has already spread e.g. stage 3 or 4.

The most common symptoms include abdominal discomfort, bloating, reduced appetite, and symptoms similar to irritable bowel syndrome. Therefore, women often ignore the early signs for many months or even years before presenting to a health professional, by which stage curative treatment is not possible.

NNUH Consultant Gynaecological Oncologist Tim Duncan said: “Whilst we continue to make significant progress in the treatment of women with ovarian cancer, through improved surgical techniques and new drug treatments, there remains a substantial challenge posed by the delays in diagnosis.

“The ability to identify disease earlier would allow more effective treatment to be provided. Increased awareness of the symptoms and signs of ovarian cancer represents a real opportunity to identify the condition earlier and allow more successful outcomes.

“It’s important to emphasise that the vast majority of women with symptoms will not have ovarian cancer, but seeing their GP to have some simple tests performed to exclude problems is vital.”

More information about the symptoms of ovarian cancer is available at www.targetovariancancer.org.uk

A number of fundraising events are taking place this month and next to support VOiCE.

This month, the Co-op in Brundall is holding a fundraising day when staff have been invited to wear brightly-coloured clothes and decorating the store in memory of a colleague who died in January shortly after being diagnosed with ovarian cancer.

In April, NNUH nurse Caroline Tayler, a runner for more than 36 years, will be taking on the London Marathon to raise funds for VOiCE.

She said: “I work within our very caring gynae outpatient’s department and have witnessed first hand the crushing blow when such awful news is given to some of our ladies.”

Anyone who would like to donate to Caroline’s fundraising appeal can do so at https://uk.virginmoneygiving.com/CarolineTayler

If you would like to take part in a fundraising event for N&N Hospitals Charity, contact fundraising@nnuh.nhs.uk or 01603 287107. 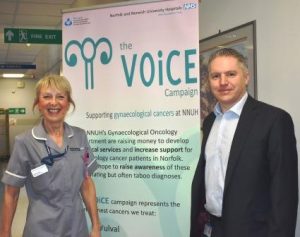