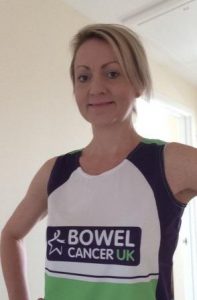 A senior nurse is raising money and awareness for a cause close to her heart as she prepares to run the London Marathon.

Harriet Richards will swap her uniform for a Bowel Cancer UK vest on 22nd April for the 26.2 mile charity run in memory of her grandfather.

The 32-year-old from Hethersett is a Senior Nurse Endoscopist and has worked for the Norfolk and Norwich University Hospitals NHS Foundation Trust (NNUH) for almost seven years.

She will be running the London Marathon in memory of Pip Pentelow, 79, who died four months after being diagnosed with bowel cancer in 2016.

Bowel cancer is poignant in her personal and professional life and she is hoping to raise thousands for Bowel Cancer UK during bowel cancer awareness month.

Harriet urged people who are eligible between the ages of 60 and 74 to take up the offer of free screening.

“My Grandpa never accepted the offer of bowel screening, which he would have been invited to every two years until he was 74. If he had chosen to undergo the very simple process of bowel screening, the outcome could have been very different for him. This is why raising awareness of the condition is so very important to me and by raising money for the UK’s leading bowel cancer charity their work will help to fund vital research and lifesaving work to help stop bowel cancer by campaigning for early diagnosis and access to the best treatment and care for all patients.

“Within my role as a Senior Nurse Endoscopist I regularly undertake procedures for the national bowel cancer screening programme. This is a very rewarding, yet challenging and demanding job which requires patient participation in helping to reduce the incidence of bowel cancer with the emphasis on early diagnosis. I see first-hand on a day to day basis how common bowel cancer is and how dramatically is can affect people’s lives and would very much like to see this decrease. So please don’t ignore the invitation of a free screening when presented the opportunity. It is always better long-term to find out as early as possible if you are affected which in turn significantly increases the probability of successful cure and further prevention.”

Harriet, who has six-month-old daughter Phoebe, is hoping to run her second London Marathon in four hours.

To sponsor her, visit https://uk.virginmoneygiving.com/fundraiser-display/showROFundraiserPage?userUrl=HarrietRichards1&pageUrl=1