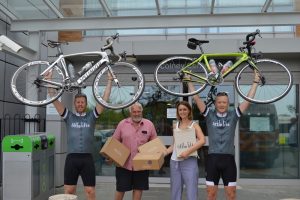 A cycling duo who are both originally from Norfolk are celebrating finishing a mammoth cycle ride to raise money for Littlelifts – a charity which supports women being treated for primary breast cancer at the Norfolk and Norwich University Hospital.

Matthew, 45 and Alex Whitaker, 44 completed a staggering 1600km journey over 10 days, which started in Switzerland and saw them cycle the whole of the River Rhine from its source in Andermatt to where it meets the North Sea in Rotterdam, Holland, finishing with a Harwich to Norwich leg on Friday 20th July.

Alex said: “The cycle ride was a massive challenge for myself and Matt but the pain was certainly worth it to raise awareness and funds for Littlelifts. I live in Germany but both Matt and I are originally from Norfolk, so we’ve really enjoyed supporting a local charity.”

Money raised will go towards the Littlelifts comfort boxes, which are given to women at the beginning of their chemotherapy treatment. The boxes include items such as herbal teas, toiletries and food items, with an aim to provide practical support and improve emotional well-being for patients.