A new technique has been developed by a NNUH doctor that could detect arthritis earlier and help patients before their condition becomes debilitating.

Dr Tom Turmezei has been leading a research project to develop an algorithm that monitors the joints of patients using 3D mapping from routine clinical scans.

The Consultant Radiologist developed this technique with a team from the University of Cambridge using computerised tomography (CT) scans to detect tiny changes in arthritic hip joints. 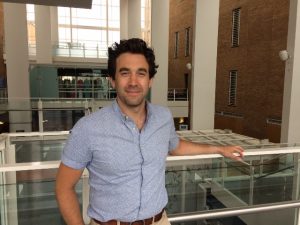 Osteoarthritis is the most common form of arthritis in the UK and develops when the articular cartilage that coats the ends of bones is worn down, resulting in painful, immobile joints. The condition is normally identified on a 2D X-ray by looking at narrowing of the space between the bones of a joint due to a loss of cartilage.

Whilst there is no recognised cure for osteoarthritis, early diagnosis can help patients to make lifestyle changes and undergo physical therapies such as muscle strengthening to manage the progress of the condition before they might finally need a joint replacement.

The new semi-automated technique, called Joint Space Mapping (JSM), was tested on human hip joints from bodies that had been donated for medical research and was found to exceed the current ‘gold standard’ of joint imaging with X-rays.

The results, which have been published in the journal Scientific Reports, show that 3D mapping could be at least twice as good as X-rays at detecting small structural changes.

Dr Turmezei said he hoped that CT scanning of patients with osteoarthritis and people at risk of developing the condition could become a reality within five years.

“It is not a magic wand to cure osteoarthritis. However, using this technique, we’re hoping to identify osteoarthritis earlier and look at potential treatments before it becomes debilitating.

“It could be used to screen at-risk populations, such as those with known arthritis, previous joint injury, or elite athletes who are at risk of developing arthritis due to the continued strain placed on their joints,” he said.

Dr Turmezei said work was continuing with the University of Cambridge and the Icelandic Heart Association to analyse data from CT scans of hip joints from patients who had volunteered to take part in research in Iceland.

Dr Turmezei and Samantha Low, Academic Clinical Fellow in Radiology at NNUH, have also established a link with the University of Kansas to work on applying the algorithm to the knee joint, one of the most common sites of osteoarthritis.