Staff have been praised for their screening and speed of sepsis treatment at the Norfolk and Norwich University Hospital (NNUH).

More than 90% of sepsis patients received treatment within an hour of diagnosis, according to new figures.

Time is of the essence when a patient is confirmed to have sepsis, which is why NNUH launched sepsis emergency kits two years ago to speed up the treatment.

New figures show that in April, May and June, 92.6% of patients received intravenous antibiotics within 60 minutes to fight the infection. Almost 85% of patients were screened for sepsis across the hospital during that time.

Dr Michael Irvine, Consultant in Intensive Care Medicine at NNUH, said: “Timely treatment is critical when treating patients for sepsis as survival rates are improved significantly if antibiotics can be administered within 60 minutes of diagnosis.

Patients are also less likely to have serious health complications if we provide prompt treatment.  However, sepsis is more difficult to identify than conditions like heart attacks and strokes, as the symptoms are often more generalised and non-specific, so it is important that all staff are aware of the risks and remain vigilant.”

“Performance remains excellent with over 92.6% patients receiving antibiotics within an hour of diagnosis. This is testament to the good awareness across the Trust, embedded pathways for the prompt delivery of antibiotics in sepsis and a continuous educational programme for medical staff across the NNUH about the importance of timely sepsis management,” he said.

The Trust developed an electronic sepsis screening tool in the Emergency Department, which has helped staff detect the condition when carrying out observations on patients, and a project is being worked on to expand electronic screening across the whole hospital.

On World Sepsis Day (13th September), the Trust has also published this video from Sarah Wratten, Sepsis Audit Nurse, explaining what sepsis is and symptoms to look out for in adults and children 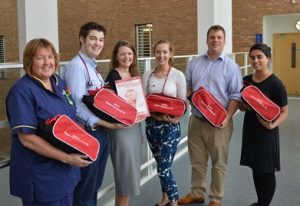