The Norfolk and Norwich University Hospital’s Media and Communications Team has won a gold award from the Chartered Institute of Public Relations (CIPR).

The hospital team won Gold for the Best Publication of the Year, which focused on the special dementia edition of the hospital’s Pulse magazine, highlighting the support available at NNUH and the wider community for people affected by dementia and their families and carers.

The magazine, which was produced for the Trust’s annual Dementia Information and Advice Fayre held in May 2018, highlighted useful information for patients and visitors including how to eat well with dementia, the work of the Dementia Support Team here at NNUH, as well as the work of local support groups and charities.

The Dementia Information and Advice Fayre, held during Dementia Awareness Week 2018, was an opportunity for those living with dementia and their families and carers to see what support is on offer from organisations throughout Norfolk.

The CIPR Awards for the Anglia, Thames and Chiltern Region were announced at an event in Cambridge on the 15th November 2018.

Fiona Devine, Director of Communications at NNUH, said: “The team is delighted to have won the Gold Award. The campaign for the dementia information fayre, including the special edition of the Pulse, provided great communications support to the hospital and we are very pleased to have been recognised by the CIPR.”

Mark Davies, Chief Executive of NNUH said: “The team do a fantastic job, which winning this award recognises. I would like to thank them for their excellent work in the Trust on staff and public communications. Good communications is very important and vital to the Trust.” 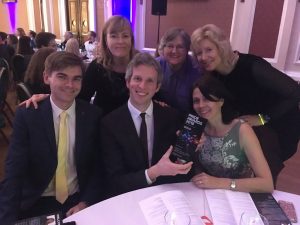