The way the Norfolk and Norwich University Hospital (NNUH) supports the Armed Forces community has been praised at an awards ceremony.

The NNUH is one of 50 employers across the country to have received the Employer Recognition Scheme (ERS) Gold Award from the Ministry of Defence.

On Monday night (12th November), Chief Executive Mark Davies received the award on behalf of the Trust from Gavin Williamson, Defence Secretary, and HRH Prince Edward, the Earl of Wessex. 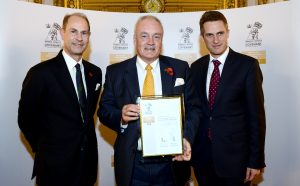 The Gold Award is awarded to businesses and organisations that have shown outstanding support for the military community and the Armed Forces Covenant. Employers won awards for initiatives such as employing veterans, supporting individuals transitioning out of the armed forces into a new career, and providing flexibility for reservists.

It comes after NNUH piloted Step into Health in 2014, which has since been adopted nationally by NHS Employers, to provide a dedicated pathway for the Armed Forces community to access career opportunities in the NHS.

The award also comes after NNUH was one of 24 NHS bodies to be named as Veteran Aware from the Veterans Covenant Hospital Alliance to ensure that the armed forces community is never disadvantaged when receiving healthcare.

Mark Davies, NNUH Chief Executive, said: “I’m delighted that the Trust has received two prestigious accolades in the space of a week for the way it supports the Armed Forces. This area has such a long and distinguished military history and this award is testament to the hard work of our staff to support the Armed Forces community.”