A Norfolk woman has been praised for her determination and fundraising effort, 20 years after being involved in a serious road traffic collision.

Betty Taylor, from Gorleston, suffered multiple injuries to her legs, hip and pelvis in a road traffic collision on the A47 Acle Straight on 30th November 1998.

She was reunited this week with one of the NNUH surgeons who helped her walk again.

John Nolan, Consultant Surgeon, said: “Betty’s injuries were so severe that we warned her that she may never walk again. However, she was determined to get back on her feet and we are very grateful for the support she has given to the orthopaedic department at NNUH over the years.”

Betty spent 10 weeks in hospital following the collision and after a number of surgeries and a long recovery process, she was able to walk again.

She has gone on to raise more than £20,000 for orthopaedic research and the department through an annual 1960s night at the Kingfisher Club in Burgh Castle and from sponsored walks.

Betty was presented with a cake by the orthopaedic team, close to the 20th anniversary of the collision. She praised Mr Nolan and fellow surgeon AD Patel for helping her to walk again.

“The surgeons were brilliant and the team at NNUH have been fantastic. I can’t thank them enough,” she said. 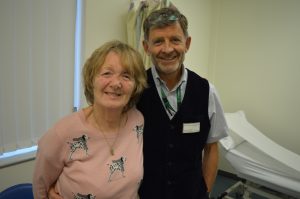