The treatment of endometrial cancer is set to be transformed at the Norfolk and Norwich University Hospital (NNUH) after the hospital charity funded a state-of-the-art piece of equipment.

The £110,000 Stryker Laparoscopy Stack System was paid for thanks to donations to the charity’s general fund and the VOiCE campaign which specifically raises money to help patients with Vulval, Ovarian, Cervical and Endometrial cancers.

The system uses the latest technology to identify sentinel nodes, which are the first few lymph nodes into which a tumour drains. This means they can be removed individually and tested without the need to take out every node unnecessarily. 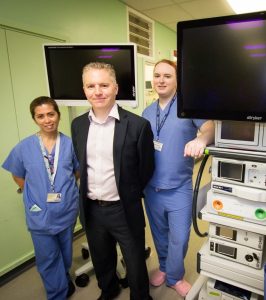 Consultant Gynaecological Oncologist Tim Duncan explained that traditional treatment of endometrial cancer involves removing the cancer and then removing all of the lymph nodes in that region of the body and checking them for disease. The results would influence what further therapy was needed.

If the lymph nodes are all clear, taking them out offers no advantage to the patient because not only has healthy tissue been removed, but it also increases the risk of lymphoedema – a condition where lymph fluid collects in tissues and causes swelling in them.

Mr Duncan said: “You can have a situation where you remove the tumour, take out the lymph nodes in that region and find that they’re all clear but leave the patient at risk of the horrendous complication of lymphoedema which is life-long, and while it’s manageable, it’s not curable.

“The Stryker system uses specialist light sources with filters to allow us to see a fluorescent ICG dye which tracks the sentinel nodes.

“It also gives us ultra-high-definition images which allows for more precise surgery. Within the stack, you also have a monitor and an accessory monitor for the assistant to look at, and an image capture system.

“Because this is emerging technology and the equipment is expensive, it’s very difficult to get funding through normal Trust means. So this has been funded exclusively from charitable funds and this could not have been possible without the charity.”

The new treatment will involve more sensitive pathology, called ultra staging. This involves the examination of just a small number of nodes, compared to up to 50, but now these can be looked at in even finer sections which can pick up even very tiny metastases.

Mr Duncan said: “In the coming months, our treatment for endometrial cancer will involve taking out the sentinel node alongside our standard treatment because we must show the accuracy of the new system. But there are still advantages to the patient because we will be ultra staging the sentinel nodes, and then we can start to realise all other benefits next year.

“We are extremely grateful for all the support we have received from the charity and it shows that giving to the hospital charity and VOiCE means money goes directly towards improving patient care at this hospital.”

He added that he expected the new equipment would have a huge positive impact on patients and compared it to the introduction of a high definition laparoscopic stack nine years ago to carry our hysterectomies, also funded by the charity.

He said: “This enabled us to carry out laparoscopic hysterectomies and we went from doing none to doing 98% which is the highest rate in the UK by a long way.

“Length of stay for that procedure is now 24 hours, down from three to four days, recovery is a third of the time, complication rates are halved, and we are expecting a similar impact with this latest piece of equipment as well.”