“It’s Time” – that’s the message from microbiology staff at the Norfolk and Norwich University Hospital (NNUH) ahead of World Tuberculosis (TB) Day.

World TB Day is observed on 24 March every year and is designed to raise public awareness globally regarding TB and the efforts being made to prevent and treat the world’s most infectious killer. 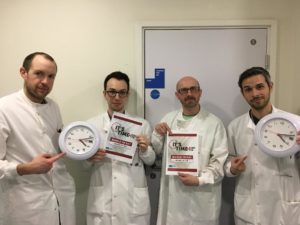 On 24 March 1882 Dr Robert Koch announced that he had discovered the bacterium that causes TB, which paved the way towards diagnosing and curing TB at the time when one in seven people died of the disease.

Mark Pointer, who works in the NNUH Microbiology Department and campaigns locally with RESULTS UK, said: “World TB Day is an important day to remember this forgotten (and our oldest) disease, but still affects over 5,000 people each year in England. That’s 5,000 too many, considering TB is preventable and curable.”

This year’s theme for World TB Day is called, It’s Time and looks to bring the global TB community together to ensure that the world’s governments are reminded of the commitments they made at last year’s United Nation’s High-Level Meeting on TB.

Mark added: “Last year’s historic UN HLM put TB on the global map and it is hoped that momentum will remain high on world and national agendas. We desperately need a new vaccine, shorter treatment times and to tackle social and stigma issues.  It’s Time for action!  It’s Time to end TB.”