Providing extra support for people living with dementia and their families

The popular NNUH Dementia Information and Advice Fayre will be returning to the East Atrium this spring.

The hospital is assembling a wealth of experts and organisations for the event, which will take place on Monday 13 May 2019 from 10am to 4.30pm.

The Dementia Information and Advice Fayre goes from strength to strength every year with a host of speakers, information stands and pop-up café.

The fayre has two keynote speakers from the University of East Anglia this year.

Prof Eneida Mioshi is Chair of Dementia Care at the Faculty of Medicine and Health Sciences at UEA. Her talk in the Benjamin Gooch Lecture Theatre will be between midday and 1pm on 13 May about supporting family carers.

Prof Michael Hornberger, who is Professor of Applied Dementia Research at the UEA, will be in the lecture theatre between 1.30pm and 2.30pm talking about “Turn around when possible: getting lost in dementia”, which will focus on his research into the condition.

The full line-up of speakers for the day has been confirmed for the lecture theatre:

11.00am – 11.30am – The Admiral, the Psychologist and the Museum: A community approach to living well with dementia – Dr Adrian Leddy, NNUH Clinical Psychologist

12pm – 1pm – ‘How about the carers? Supporting family carers in dementia’ – Eneida Mioshi, Professor of Dementia Care at the Faculty of Medicine and Health Sciences UEA.

Liz Yaxley, Dementia Services Manager at NNUH, said: “This is the third Dementia Information and Advice Fayre we have run at the hospital and we are very excited about the wealth of expertise that we have assembled to provide the best possible support to people living with dementia, their carers and families.”

The fayre is traditionally held on the week before national Dementia Action Week, which this year runs between 20 and 26 May.

The Trust has launched a community knitting project for this year’s fayre and is asking for people to knit or crochet forget-me-not flowers. The deadline to drop them off is 16 April. 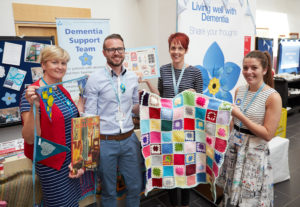 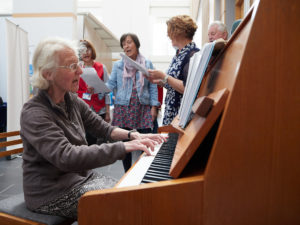