A drinks trolley round with a difference took place on the wards of NNUH when staff served up non-alcoholic cocktails. 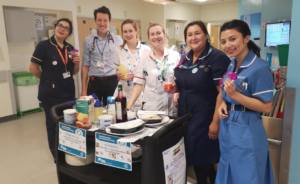 Dieticians and speech and language therapists served up mocktails as part of Swallowing Awareness Day, which took place during national Nutrition and Hydration Week.

Swallowing problems (dysphagia) can affect patients with conditions such as motor neurone disease, dementia, Parkinson’s, people who have had a stroke, and some patients with head and neck cancers.

Staff served up mocktails as part of an initiative to raise awareness of a new thickener that is being introduced at NNUH for patients with swallowing problems.

They also had a stand in the West Atrium to raise awareness of the International Dysphagia Diet Standardisation Initiative – the new global standard language for describing texture for modified foods and liquids, which NNUH is adopting from 25 March.

A cake sale organised by the dieticians and speech and language therapists also raised more than £200 for the Motor Neurone Disease Association. 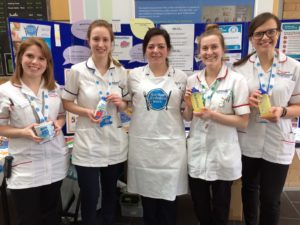