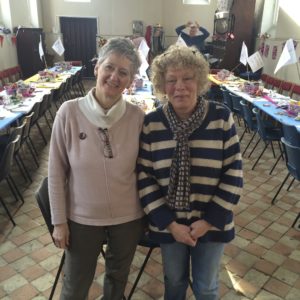 A former nurse has written a book with half the proceeds from the sale going to the stroke unit at the Norfolk and Norwich University Hospital where she was treated in 2017.

Lindsay Dowding, who worked at the N&N for 13 years, was taking part in a workshop in Pottergate in Norwich when she suffered a stroke.

She was rushed to hospital within minutes and, two years on, has recovered well.

Now she has penned Charlie the Horse, Owl and the Planning Application, a modern-day fable, which will also benefit the hospital’s stroke team.

She said: The stroke pathway team were fantastic and I recovered after two nights in the acute stroke unit and they saved the day really.”

One year later, friend and artist Lynn Rutherford also suffered a serious stroke and was treated by the same team at the N&N.

Lindsay said: “She was in the opposite bed to what had been mine and she was also under the care of Consultant Stroke Physician Chit Hmu.

“The whole team was fantastic, and against all the odds she has made it and it is all down to the care we received.”
Lindsay, who retired in 2014, will be holding a launch of her book Charlie the Horse, Owl and the Planning Application at The Boars pub on Spooner Row on 17th April.

Set in the village of Spooner Row, near Wymondham, it tells the story of the animals who live in the village and how housing developments, taking over the surrounding fields affect the lives of some of the endangered species living there. Illustrations in the book are by Lynn Rutherford.

While researching the book, Lindsay discovered that the real-life horse Charlie belonged to Darren and Mel Walker, who both also work at the N&N.

Lindsay said: “Half the proceeds from the book will go to the stroke unit because, if it wasn’t for them there would be no book and we wouldn’t be doing this.

“Lynn and I so much wish to help stroke awareness, the fact that you can recover from this and get on with your life in many instances, and to thank Dr Hmu and the entire unit.

“Hospitals are having a hard time at present but their amazing work should be recognised.”

Everyone is welcome to come along to the Boars pub at Spooner Row, Bunwell Road, on 17 April from 3-6pm.

There will be music by Composer and jazz trumpeter Chris Dowding who has written a song for the book.

Charlie the Horse, Owl and the Planning Application is available from Amazon, Jarrolds in Norwich, Reeves in Wymondham or via email at lindsaydowding@btinternet.com or lindsay36@tiscali.co.uk