Hundreds attended the annual event on Monday 13 May, which brought together a wealth of information and experts to provide support to people living with dementia and their carers.

There were more than 30 information stands and seven speakers in the lecture theatre talking about subjects such as support for carers, dementia research and assistive technology.

A ‘waterfall’ featuring more than 12,000 knitted or crochet forget-me-nots, which had been created by individuals and community groups from across Norfolk, also went on display as part of the fayre in the East Atrium.

Liz Yaxley, Dementia Services Manager at NNUH, said: “We are delighted with the response we have had to this year’s fayre. It is heart-warming that so many people took part in our community art project and the final result formed a stunning centrepiece for the event.

We’ve had some great feedback from patients and carers who attended the fayre and came away with lots of help and support.”

The Dementia Support Team at NNUH also received a donation of new activities from Taverham and District Lions Club. The new resources will be used to carry out one-to-one meaningful activities with patients living with dementia.

To view a photo gallery from Monday’s event, click here 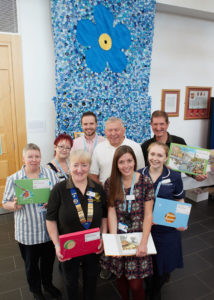