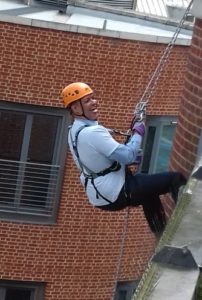 Dozens of people undertook an abseil challenge on Saturday to support the Boudicca Appeal for a new dedicated breast cancer unit at the Norfolk and Norwich University Hospital.

The abseil down The Forum in Norwich, organised by the N&N Hospitals Charity, is part of a series of fundraising events throughout the year trying to raise £800,000 for the new unit.

Some abseilers were doing it to raise money for other departments in the hospital too. Around 50 people took part in all, including a few passers-by who signed up to join in on the spur of the moment.

One of them, Janet Frank – a staff nurse at NNUH – was receiving treatment for breast cancer this time last year.

“I wanted to do the abseil because I was diagnosed with breast cancer in December 2017, when I was 56. It was such a shock to hear you have cancer.”

“I was having my treatment at NNUH this time last year,” she said. “I had treatment until October, luckily I was all right. I had chemotherapy, radiotherapy and surgery.

“My cancer was found on a mammogram. I want to encourage people to have regular scans – it’s so important to highlight it. The new breast cancer unit will be brilliant.”

After the abseil, Janet, who works on Cringleford ward, said: “It was brilliant – I did it twice!”

And the reaction of 79-year-old abseiler Win Wade was: “Brilliant! It was lovely, really enjoyed it. I’m always up for a bit of an adventure.”

Louise Cook, Head of Fundraising, said: “We’re grateful to all abseilers, volunteers and professionals who made this a wonderful day.

“Thank you to everyone who has taken part in the abseil, including those who joined on the day, or provided a donation. Money will not only help the Boudicca Appeal but also other parts of the hospital.”
To find out more or to donate please go to www.nnuh.org.uk @NNUHCharity