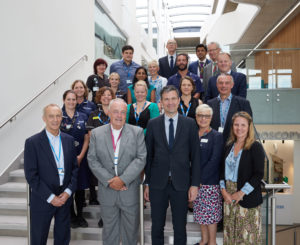 As part of a year of celebration for the Jenny Lind Children’s Hospital His Excellency Mr Torbjörn Sohlström, Sweden’s Ambassador to the UK, visited the hospital in Norwich yesterday. He met staff and patients, touring the Neonatal Intensive Care Unit, Children’s Assessment Unit, Buxton Ward and the Paediatric Emergency Department.

Mark Davies, Chief Executive of the Norfolk and Norwich University Hospital which includes the Jenny Lind, says: “This visit is a great honour for us and pays tribute to Swedish Opera singer Jenny Lind whose charitable efforts helped to found the children’s hospital back in 1854.”

Louise Cook, NNUH Head of Fundraising who has organised the visit, says: “We are thrilled to mark this anniversary with such an important visit, celebrating our history and the international link we have with Sweden.”

The hospital admitted its first inpatients way back on April 3, 1854 thanks to the generosity and goodwill of the Swedish opera singer, Jenny Lind. It was the second such hospital to open in the UK, with Great Ormond Street Hospital for Children having opened only two years earlier. At the beginning of this year, the Jenny Lind Children’s Hospital, now part of the Norfolk and Norwich University Hospital, began its year of events with an evening of music and talks.

The modern Jenny Lind Children’s Hospital provides emergency and specialist care to Children and young people from Norwich, Norfolk and often from further afield too. There is a large team of experts including medical, surgical, community and neonatal consultants, nurses, physiotherapists, occupational therapists, dietetics, speech and language therapist, play specialists, psychologist and other professionals. This means the Jenny Lind can provide high quality multidisciplinary care from birth to adulthood for children and young people with a wide range of medical and surgical problems, whether these are long term or emergency presentations.