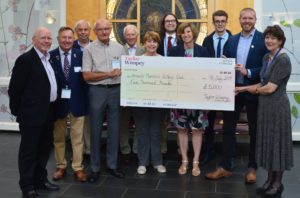 Norfolk and Norwich University Hospital (NNUH) has welcomed Taylor Wimpey and Norwich Rotarians to a behind the scenes tour of the hospital’s facilities.

Earlier this month, Norwich Rotary Club’s announced Taylor Wimpey East Anglia as official headline sponsor of the annual Craft Fair, taking place this year on Saturday 10th August. The housebuilder has donated £5,000 to the fair, which is being held in aid of the Boudicca Breast Cancer Appeal being run by the NNUH Charity.

The NNUH breast unit handles breast cancer referrals from general practitioners from across the region, and the number of patients it sees each month has almost doubled in the last five years. The hospital is in need of a new, dedicated breast unit urgently.

The Boudicca Breast Cancer Appeal was set up in October 2018 to help fund a new unit, in order for the hospital to provide faster diagnosis and treatment, state-of-the-art equipment and same-day diagnostic tests so that patients need only attend the clinic once.

Louise Cook, Fundraising Manager at Norfolk and Norwich University Hospital, said: “Since the launch of the appeal, we’ve already raised £170,000 towards our target. We have the space we need, but first we need to create the correct environment. We’re delighted to have ordered our first piece of equipment and, going forward, our aim is to spend the money raised on purchasing additional items so that we can start treating patients. Ultimately, the aim of the Boudicca Appeal is to reduce the stress and anxiety patients feel while waiting for tests.”

Caroline Carter, Sales and Marketing Director of Taylor Wimpey East Anglia, says: “We feel privileged to have been taken on a tour of the hospital’s facilities. It was wonderful to see how the funds from the Boudicca Appeal have already been spent, and we’re so proud that we’re able to play a part in this fantastic legacy.”

The Craft Fair, which is in its eighth year, is organised by the Rotary Club’s in Norwich. Paul Constable, President of Norwich Marchesi Rotary Club, says: “We’ve been working with NNUH since 2012, when we supported the hospital’s ‘Target Radiotherapy’ appeal. In 2014 we supported an appeal for a new Brachytherapy treatment facility, and the Marchesi Rotary Club, with support from many local clubs and internationally, purchased the specialist equipment for the project, costing £53,400. Since 2016, as part of the Rotary International initiative to try to defeat polio, we have provided crocus bulbs to the hospital to decorate grassed areas on the approach roads to the hospital and daffodil bulbs to help enhance the woodland walk around the grounds for both patients and visitors. Through the continuing support of many Rotary Clubs in the District, a Memory Room has recently been established at the hospital to assist patients with dementia.”