NNUH nurse Sam Mosedale thinks daily about the organ donor who transformed her life after receiving a kidney transplant two years ago.

The 44-year-old, from Norwich, became seriously unwell at work in January 2017 and was diagnosed with glomerulonephritis, a condition that caused her kidneys to fail.

Nine months later, she received a life-changing transplant on 9 September 2017 from a man in his 50s who was on the organ donor register. 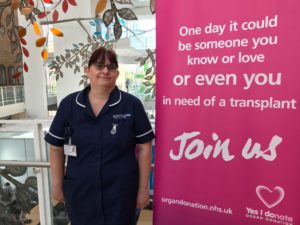 Sam, who works for the integrated discharge team at NNUH, praised the “brilliant” teams at the hospital for the care she received and at Addenbrooke’s Hospital where she received her transplant.

She urged people to talk to their loved ones about their wishes around organ donation.

Sam was receiving dialysis three times a week following her diagnosis and received a new kidney three weeks after going on the waiting list.

“I think about the donor and their family every day. It is not just my life he has changed, but several other people. It is such an amazing gift to give and gives someone a second chance. It has improved my quality of life so much and I am not limited to drinking 500ml of fluid a day anymore.

“I know the donor was a man in his early 50s who had died. I have written a letter to the family, but I have not heard anything back.

“I still get fatigued sometimes, but it is nothing like it used to be and I was able to take my daughter to Disneyland Paris last year, which I would never had been able to do on dialysis.”

She’ll be marking the second anniversary of her transplant by going out for a meal with family on Sunday and bringing in sweet treats for her colleagues on Monday.