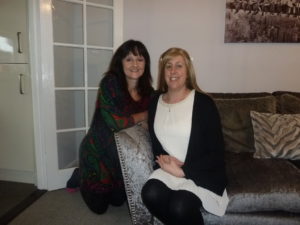 A woman who was diagnosed with breast cancer earlier this year has urged everyone to back the Boudicca Breast Cancer Appeal to create a new breast cancer unit at the Norfolk and Norwich University Hospital.

Maria Carroll, from Sprowston in Norwich, was seen at the N&N just days after finding a breast lump in May this year and was fortunate to be able to have her diagnostic tests on the same day.  Now, as the N&N Hospitals Charity marks the appeal’s one-year anniversary, 33-year-old Maria has given her support to the Boudicca Appeal to create the unit which would mean all patients receiving the same-day diagnosis service.

The charity launched the appeal last October, and thanks to donations from individuals and organisations alike, it has now reached almost £250,000.  Work started earlier in the year to transform the space into the one-stop-shop for patients and next week will see the installation of some of the new equipment which has already been purchased.  This is expected to take two weeks, and will operational from mid-November.

The new equipment includes a Stereotactic mammography system which uses low-dose x-rays to help locate a breast abnormality and remove a tissue and is less invasive than surgical biopsy.

The appeal aims to raise £800,000 to create the unit where patients can have the necessary images taken, undergo a biopsy and see their consultant in one appointment. Currently, not all patients are provided with this same-day diagnosis service because of limited capacity in the existing unit.

Professor Erika Denton, NNUH Medical Director, said:  “We have a very skilled team supporting our breast cancer patients every step of the way.  The Boudicca Appeal is enhancing the care they can provide by expanding our facilities and enabling new equipment to be purchased.  It is gratifying to see the level of support we have received from the local community and how it is benefiting our services.”

Dr Arne Juette, Director of Breast Imaging, said “I am filled with awe and deep gratitude to the countless wonderful people who have so generously given us their support throughout the first year of our charity, be it through organising fund-raising events or donating to the charity, or just simply spreading the word. Although we still have to go some way with our final goal, it is only through their amazing support and wondrous initiative that we have been able to already kick-start the transformation of our unit, which will hopefully enable us to make a real difference to our patients very soon.”

The N&N Hospitals Charity is urging even more people to get behind the appeal which has received fantastic support from many individuals, groups and businesses, including Norfolk Snowsports Club in Trowse, Old Hall Farm in Woodton, The Forum in Norwich, the Rotary Clubs of Norwich which organised a fundraising ball at the Assembly House, and Desira Norwich, which donated a car to be raffled.

Head of Fundraising, Louise Cook said: “We have been overwhelmed by the generosity of the people of Norfolk. We have met some amazing fundraisers who have done so much to raise money for this appeal and every pound raised is being used to improve the facility for the benefit of our patients.

“We have had charity walks, fundraising balls, cake sales, raft races, fashion shows, abseils, fetes, car washes and everything in between – if it can be done, our amazing fundraisers have done it.

“As we enter our second year, we can’t wait to see what ideas our fundraisers come up with and please consider supporting us, or getting your workplace to choose us as their charity for the year.

Anyone who would like to find out more can call the N&N Hospitals Charity on 01603 287107 or visit www.nnuh.org.uk or donate directly at www.justgiving.com/campaign/boudicca

When Maria Carroll found a lump in her breast in May 2019, she was only too aware of the importance of getting it checked out quickly.

Her nan had breast cancer so Maria knew to regularly check for lumps and other breast changes.

The 33-year-old from Sprowston saw her GP and a few days later she was at the Norfolk and Norwich University Hospital where she saw Consultant Simon Pain and underwent a mammogram and biopsy following which the cancer was confirmed.

Maria said: “In my head and deep down I thought ‘it is cancer’ but you try and stay positive. I saw Mr Pain straight away, had the mammogram then biopsy, I was lucky to have it all. Had I needed to wait for the tests, I would have been more anxious.”

Maria was fortunate to have had the tests she needed on the same day. However, since the breast cancer unit has seen an 80 per cent increase in patient numbers over the past five years, the current unit is unable to provide a same-day diagnosis to all patients.

This is something the Boudicca Appeal will address and with £250,000 of the £800,000 already raised, building work is already taking place and new equipment will be in place next month.

Maria has been accompanied at some of her appointments by friend Janet Howard, whose mum was treated for breast cancer five years ago but sadly died in January 2017. Maria’s nan has also been a great support to her by taking her to her appointments.

Maria said: “You’ve got the worry about the cancer and all the different departments which are involved, and the paperwork so Janet is really good because she comes to the hospital with me and is another pair of ears to take it all in.

“I have had four lots of chemotherapy following which the tumour had really shrunk then I had the mastectomy and reconstruction at the beginning of September. I will have more chemotherapy and hopefully that will be the end of the treatment. The cancer was Grade 3 but fortunately hadn’t spread to the lymph nodes.

Janet has been a fantastic support for Maria, but it’s not the first time she has taken on the role after her mum Jenny was diagnosed with breast cancer in 2014.

Janet said: “She noticed her breast was looking different and she said to me later that she should have gone and got it checked out sooner but you think everything is going to be all right.”

Janet’s mum had Grade 3 triple-negative breast cancer which is an aggressive form of cancer in which the three most common types of receptors which fuel most breast cancer growth – oestrogen, progesterone and excess HER2 protein – are not present.

This means it does not respond to hormonal therapy medicines or medicines that target HER2 protein receptors although it does respond to chemotherapy.

Janet said: “It had spread to the lymph nodes so they were removed but she then suffered with complications, including lymphedema which made her arm swell up massively.

“Mum had chemotherapy and a mastectomy and was initially told she was in the clear.

“But it came back and spread quickly and into her chest and she went pretty quickly at the age of 72.

“That was three years ago and I can remember how hard it was when you are waiting around for tests and results, it is horrible.

“Everyone was lovely and doing their best but it was just so busy – we just really hope that the appeal reaches its target and nobody has to wait for tests and to find out if they have cancer.” For more information and to support the Boudicca Breast Cancer Appeal, go to https://nnuh.org.uk/about-us/latest-campaigns-and-appeals/the-boudicca-appeal/