David Anstee says he feels that he’s at the forefront of new treatments for high-risk bone marrow cancer after joining a clinical trial at the Norfolk and Norwich University Hospital (NNUH).

The 58-year-old, from Banham, was diagnosed with myeloma in June 2018 after experiencing a lack of energy, exhaustion and a painful back and hips.

He jumped at the chance of taking part in a clinical trial called MUK9 that is using state-of-the-art genetic profiling and a novel drug regime that is tailored to an individual’s genetic subtype.

NNUH has recruited the highest number of patients onto the nationwide research study, which is taking place across 40 hospitals and involves 472 patients.

David said he already had some knowledge of clinical trials through his work for a scientific instrument company in Cambridge and had no doubts about joining MUK9 when he was offered the chance to take part.

He said: “Myeloma is incurable, but it is treatable and I have a high risk type of myeloma. My treatment involves taking five different drugs that have not been given in this way before. It feels like I’m at the forefront of new treatments for myeloma. I have access to drugs that I would not have access to if I was not this trial, so it was an easy decision to make.

Being on the trial means I have to give extra bloods and bone marrow biopsies, but that is a very small price to pay. Every stage of the process is explained to me and what is involved. The level of control and safety is paramount and I am monitored constantly. I know that the drugs have been tested a lot before they have got to this stage.”

MUK9 has recently closed for recruitment and a total of 39 patients at NNUH have been involved in the clinical trial. It is funded jointly by Janssen, Celgene and Myeloma UK and led by the Clinical Trials Research Unit at the University of Leeds.

Victoria Licence, NNUH Clinical Trials Practitioner, said: “We are proud to be involved in this study, which aims to identify the best treatment options for high-risk myeloma patients and a lot of effort and great team work has taken place at NNUH to get to this stage.

In the end the real winners are of course our patients and the real loser is myeloma.” 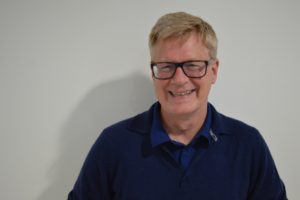 David Anstee who is taking part in the MUK9 cancer trial