Celebrating the contribution of NNUH staff and volunteers

The outstanding contribution of NHS staff and volunteers was celebrated on Friday (8 November) at the Norfolk and Norwich University Hospitals NHS Foundation Trust’s staff awards.

Almost 300 staff and volunteers attended the annual do at OPEN in Norwich, which included long service awards for 55 individuals who have amassed an impressive 1,555 years of service between them.

Almost 700 award nominations were received from across the Trust and this year’s awards were sponsored by Octagon, Serco and the Norfolk and Norwich Hospitals Charity.

David White, NNUH Chairman, said: “Our thanks go to the excellent individuals and teams at our hospitals who go the extra mile to help patients and colleagues, along with those who have given so much of their lives to our hospitals and to the NHS. The judges had a difficult, sometimes impossible, job to pick out the winners with so many star performers.”

Sam Higginson, NNUH Chief Executive, said: “It has been an honour and a privilege to meet so many worthy winners and to thank them personally for their ongoing efforts to improve patient care.”

“This has been a great opportunity to reflect on everything that our staff and volunteers have achieved and what they continue to do to improve patient care.”

Forty-three members of staff were recognised for 25 years of service. 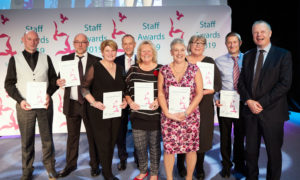 The Patient Choice awards were supported by the Eastern Daily Press.

Apprentice of the Year – Shana MacDonald and Eleanor Lovett

Team of the Year Award – Endoscopy

Ward of the Year – Cringleford Ward

Employee of the Year – Vicki Currie

Volunteer of the Year – Hugh Darrah 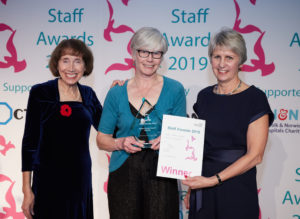 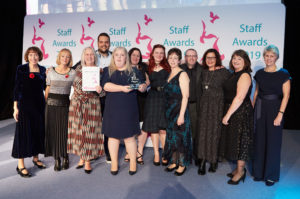 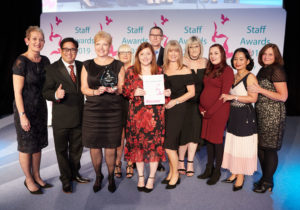 Ward of the Year – Cringleford 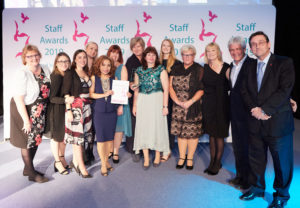 Team of the year – endoscop