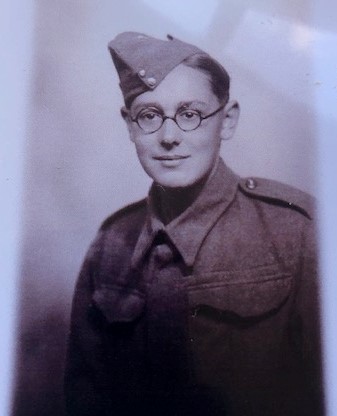 A 96-year-old army veteran has raised more than £2,000 for the N&N Hospitals Charity after the Covid-19 pandemic led to the cancellation of VE Day celebrations at Buckingham Palace.

Brian Garrad, from Coltishall, was one of 700 veterans from across the UK invited to a three day celebration in London, starting with a parade through the capital, a flyover,  afternoon tea at the Palace, followed later in the day by dinner with the Queen and other members of the Royal Family.

This was to be followed on Saturday by a fun day in St James’s Park with military bands adding to the spectacle.

However, instead Mr Garrad has spent the past seven weeks in lockdown with his daughter and her family in Irstead, near Horning, and inspired by Captain Tom Moore’s charity challenge, has been walking around the garden in a bid to cover 10 miles in a month – 70 laps.

Mr Garrad served with the 120th Light Anti-Aircraft Regiment (120th LAA Rgt) during World War II, an air defence unit of the British Army’s Royal Artillery and spent the majority of that time in France, often driving ammunition to the front line .

His daughter Ruth Dockerty said: “Dad aimed to raise £500 for the hospital charity but he has exceeded that and is now up to £2,235.

“This Friday he had been invited to be part of the special VE Day celebrations in London but that has obviously been cancelled now, so instead he will be doing more laps in the garden and we will be waving our Union Jacks at him for his own little parade.

“He normally can’t walk 100 metres so this is a huge achievement for him.”

Mr Garrad said: “I have been totally inspired by Captain Tom Moore’s fundraising for the NHS and I wanted to do my part.

“So, I gave myself the challenge to walk 10 miles in a month and to do this I will need to do 70 laps of my daughter’s garden. This is hard for me as I have COPD and find walking difficult but I am determined and with your support it will keep me going.”

If you are able to support Mr Garrad and the N&N Hospitals Charity, you can make a donation via his fundraising page here:  https://justgiving.com/fundraising/brian-garrad