A team of runners from the Apple store in Norwich have completed a 345 mile race to raise money for Norfolk and Norwich Hospitals Charity.

The team, led by Tom Newman from the Apple store in Norwich, took part in the virtual race from Norwich to London then on to Leicester and back raising more than £2,000.

He said: “The idea came to mind during a run. ‘Could I run to London in a week?’ Probably not alone but as a team we might be able to and it seemed like a realistic short-term challenge.

“We saw the fantastic work others have been doing for charity and Apple stores around the UK have been getting involved supporting the community so I felt like we too could rise to a challenge, have some fun and raise some money.”

The store has a small running group and the challenge opened up to some non-runners, including those who wanted to walk or cycle, with the cyclists facing a handicap.

Tom said: “The team really put in the effort and we completed the distance in two days, after deciding to continue from London to Leicester where one of our staff members had been staying with parents when lockdown started. Everyone put in such an incredible effort.

“The results have been incredible and it’s amazing the money which has been raised for the charity. It really helped lift the spirits of everyone involved. We were able to work together as a team during the time we have been apart and it helped keep us that bit closer together.”

N&N Hospitals Charity Coordinator Lynn Crombie said: “We are so grateful to the team at Apple for thinking of us and raising such a fantastic amount – thank you to them and everyone who supported the team.

“It’s lovely to hear how the team also used the challenge to work together while being apart.”

To find out more : www.nnuhcharity.org.uk 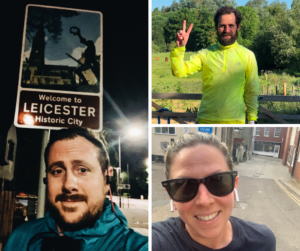