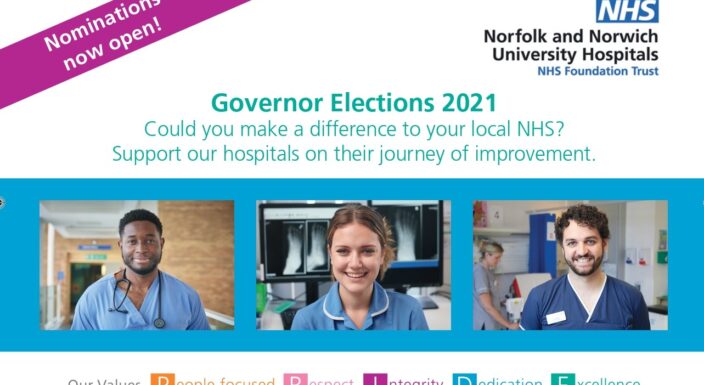 People living in Norfolk will have the opportunity to put their name forward as a governor at the Norfolk and Norwich University Hospitals NHS Foundation Trust, as five public governors reach the end of their three-year term. The vacancies are in Broadland, North Norfolk, King’s Lynn and West Norfolk, plus two posts in Breckland.

David White, Chairman of NNUH, said: “We want governors drawn from a wide range of backgrounds who share our passion for providing the best possible services for local people.

“Our governors come together to form our Council of Governors which has an important role in shaping the future of the organisation.

“Governors need enthusiasm for the role and a desire to get involved with our hospitals. We look at what’s working well and what could be improved with governors providing a useful link with the local community. ”

The responsibilities of governors include supporting the recruitment of new members, attending Council of Governor meetings and engaging with the Board of Directors on a range of issues. Governors serve a term of three years after which they can be re-elected.

To be eligible to become a governor, people must be aged over 16 years, interested in the success of the Trust and join NNUH’s free membership scheme at https://secure.membra.co.uk/nnuhapplicationform/

Potential candidates have until 3 November to return their completed election forms. The results of the election, where members vote for their choice of governor, will be announced on 14 December.