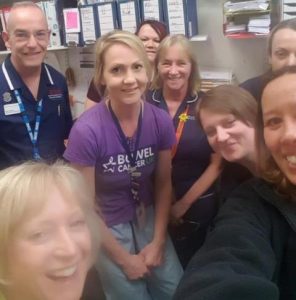 One of the country’s most senior nurses has praised staff following a visit to the Norfolk and Norwich University Hospital.

Ruth May, who is Executive Director of Nursing at NHS Improvement, paid a visit to the Bowel Cancer Screening team on Monday (9th April) during Bowel Cancer Awareness Month.

The NNUH was one of the first centres in the country to set up a screening programme in 2006 and last year more than 63,000 people between the ages of 60 and 74 were tested.

The service underwent a review from the Quality Assurance team at Public Health England in November 2017 where it was described as “well-led” and “at the forefront of bowel screening in England.”

Ruth met with the specialist screening practitioners and nurse endoscopists and also visited the hospital’s Emergency Department and maternity teams.

She said: “It was brilliant to spend time with the staff at NNUH. I particularly wanted to visit the screening team as it is Bowel Cancer Awareness Month. It was great to meet such an enthusiastic and collaborative team that has worked hard to maintain a high quality service that meets national standards.”

Frances Bolger, Acting Director of Nursing at NNUH said: “It was very inspiring to receive a visit from Ruth. Our staff were excited to talk about their work and give her a tour of the departments. She met some inspirational clinical nurse leaders.”