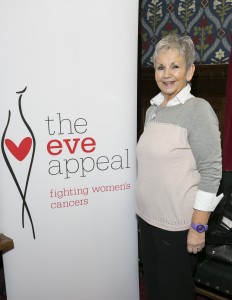 Hospital Pharmacy Technician Kay Kent recently visited the House of Commons following an invitation from women’s cancer charity, The Eve Appeal, to attend the launch of their fundraising and awareness campaign – Make Time for Tea which coincided with Ovarian Cancer Awareness Month in March.

Kay, who works at the Norfolk and Norwich University Hospital’s Pharmacy Department has been fundraising for The Eve Appeal since being successfully treated for gynaecological cancer at the hospital where she works in 2014.

Kay, who has worked at NNUH since 1984, said: “After my own treatment, I wanted to give something back and linked up with The Eve Appeal to help with fundraising and raising awareness of gynaecological cancers. We know our bodies better than anyone so can sense when something is not quite right, with typical symptoms being as simple as feeling bloated, so I implore you all to make sure you’re aware of the key signs and symptoms.”

Wesley Hutchins from the Eve Appeal said: “Kay is such an inspiration not only to those who are close to her and work with her; but to us as a charity. She is an amazing advocate for women’s cancers and her efforts in raising awareness and vital funds to ensure The Eve Appeal can continue their pioneering research into early detection and prevention is very admirable.

“Every day 55 women in the UK are diagnosed with a form of gynaecological cancer, and sadly 21 women lose their battle; and sadly that’s too many mothers, wives, daughters, partners and friends. Therefore, without the support of individuals like Kay we would not be able to continue the fund our ground-breaking research.”