Norfolk and Norwich University Hospital has launched an improved ‘finger food menu’ during Dementia Awareness Week to aid patients including those with dementia. Research has shown that a finger food menu for patients with dementia could help with enjoyment of food and drink, improve nutritional intake, help maintain independence and avoid co-ordination problems with cutlery.

The trial was launched by an internal focus group, for Nutrition and Hydration for People with Dementia, on two of the hospitals Older Peoples Medicines Wards, Holt and Knapton. The trial was so successful it will now be rolled out across all wards within the hospital. Staff commented that they liked the format and options available to the patients whilst patients enjoyed the variety they were able to choose from and eating in a way that suits them.

Although the menu launch across all the wards is on 16th May during Dementia Awareness Week, the menu is not exclusively for people with dementia.  Other patients could benefit including those with arthritic hands or people with severe tremors who find it difficult using cutlery, people with a poor appetite where smaller portions combined together may seem less daunting; where the Finger Foods Menu may offer increased independence and the opportunity to eat independently.

Fran Howe, NNUH Deputy Dietetic Services Manager said:  “Previously a small number of finger foods were available to order so the group wanted to develop a comprehensive and varied menu that met daily energy and protein requirements as directed by the hospital foods standards. The trial aimed to increase the choice available to patients who may find traditional hospital meal times difficult. The menu allows patients to eat foods that they may find easier to consume in a way which is similar to how they would eat at home. Originally the menu was designed for patients with dementia but it has been recognised that it could help all kinds of patients.”

Nursing staff, dietetic staff, speech and language therapy staff and catering staff will identify if a patient may benefit from or have an improved oral intake by switching to the Finger Foods Menu.  Patients will then select a combination of foods from the Finger Food Menu for each mealtime and this will be served at the same time as the standard menu. 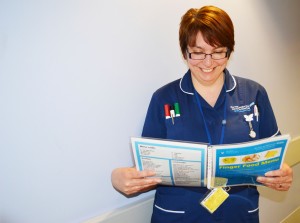