NNUH’s ‘This is me’ theme marks Dementia Awareness Week

The theme of the Dementia Awareness Week (16th to 20th May) at the Norfolk and Norwich University Hospital is ‘This is Me’.

Various activities are being held to mark the week at the hospital including a talk hosted by Dr Martyn Patel, lead consultant for dementia at NNUH. On Thursday 19th May at 6pm members of the public are being invited to hear about the Norfolk and Norwich University Hospital’s approach to dementia care with the use of the ‘This is Me’ booklets highlighting their importance in providing exemplar care.

Martyn Patel, NNUH Lead Consultant for Dementia, says: “Norfolk has a higher than average older population and dementia is a subject which will touch many of our lives as carers, friends or family members. The talk is an opportunity to come along and find out more about how we care for patients with dementia in our hospitals, including how we work with partners and carers to improve the patients’ experience while they stay with us.”

An information stand will be in place from 16-20 May, near the hospital’s main restaurant, with information for carers on specialist services for people with dementia in NNUH, plus stands showcasing some of our excellent practice in the hospital to help person-centred care. This is in addition to the hospital’s Dementia Support Team which visits patients, carers and families on the wards to provide emotional support, one to one activities for patients and signposting sources of help for families.

The Dementia team will also be launching a new finger food menu designed especially for patients including those with dementia. The menu will allow patients to select smaller items of food which appeal to them.

Elizabeth Yaxley, NNUH Dementia Services Manager said: “We have a highly skilled and committed multi-disciplinary team who have the experience and expertise to care for this group of patients. There are a number of things we can do in Norfolk to help people with Dementia and the week will be demonstrating just a few of these.”

Key facts include :
– An estimated 16,400 people in Norfolk have dementia (either diagnosed or undiagnosed). Equivalent to 1 in every 53 people in Norfolk or the populations of Cromer, Hunstanton and Holt combined.
– There are about 26 new cases of dementia per year per 1000 population of over 65s in Norfolk (diagnosed or undiagnosed). That is equivalent to about 78 new people getting dementia in Wymondham per year.
– During the next 20 years there will be an estimated additional 9,000 people with dementia. That is equivalent to the whole population of Downham Market. The greatest growth will be in people who are more than 90 years old.

The public talk will take place in the Benjamin Gooch Lecture Theatre at the Norfolk and Norwich, Colney Lane, Norwich, NR4 7UY. There will be no charge for car parking in the main hospital car park.

Spaces will be limited and on a first come first serve basis. Please call 01603 287634 or e-mail membership@nnuh.nhs.uk. The talk will also be available on the website and live on Periscope via the NNUH Twitter feed.

Notes to editors
* Approximately 850,000 people in the UK have dementia and this is set to rise to a million by 2025 (Alzheimer’s Society). This represents 5% of the total population aged 65 and over, rising to 20% of the population aged 80 and over (www.dh.gov.uk) The risk of developing dementia increases sharply with age, but younger people can get dementia as well.

About 1 in 3 to 1 in 5 people in hospital have dementia ( Ref Public health doc as above).

The NNUH has 1,248 beds; a conservative estimate would indicate that more than 200 patients at the hospital at any one time may have dementia. 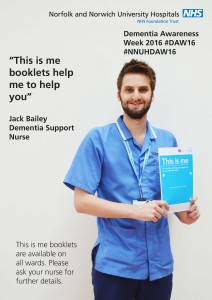