State of the art robotic surgery for patients with prostate cancer 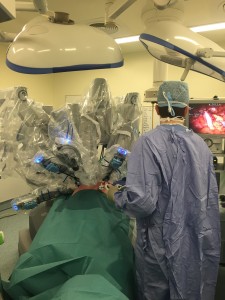 The robot being used for prostate cancer surgery

A new £1 million robot is being used to carry out prostate cancer surgery at the Norfolk and Norwich University Hospital.

Robotic assisted prostatectomy is a type of keyhole (laparoscopic) surgery which is used to remove the prostate. The robot has four arms which are controlled by a surgeon sitting at a console in the operating theatre. One arm holds a camera and the others hold surgical instruments, such as scissors or graspers. The surgeon can see the operating area through the console which gives a magnified 3D view.

Mr Robert Mills, Consultant Surgeon in Urology, said: “The real benefit of using a robot for this type of surgery is the dexterity and the improved vision it provides. The images I can see when using the robot are magnified 10 times. It also gives me a much greater range of movement when operating. Using the robot allows me to make very accurate movements at almost any angle in confined spaces. That makes it easier to be more precise with an incision or putting in a stitch, for example.” 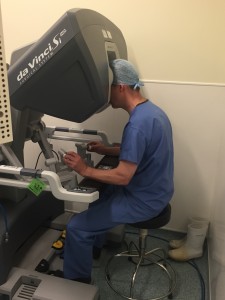 Consultant Robert Mills at the console

Previously patients at the NNUH were offered laparoscopic radical prostatectomies or had to travel to London or Cambridge for robotic surgery. After a robotic assisted prostatectomy, patients are discharged on the following day or soon after and see their consultant after six weeks to check that the cancer has been removed.

Mark Davies, Chief Executive of NNUH, added: “We have a clear strategy to invest in the latest technology to continue to develop our role as a major regional centre in the East of England. This is further proof that we have some of the most skilled staff using state of the art technology for the benefit of patients across Norfolk, Suffolk and Cambridgeshire.”

Sixty-nine year old Michael Broom from Hethersett was the first patient to have a robotic assisted prostatectomy at NNUH. He said: “When I had the option, robotic surgery was my choice rather than traditional surgery, having read up on it. I recovered from the operation much sooner than I thought possible and it really allayed any fears I had. I was only in hospital for a few days with very little pain following the operation and had fantastic care from all the staff in the departments concerned. I’m amazed at how well it went.”

Michael has since received the all clear and is now fit and well.

There are three surgeons within the Urology department currently being trained to perform the surgery. The robot is also due to be used to perform keyhole surgery for patients with kidney cancer later in the year.