The first person in Europe to take part in the current phase of an NIHR Ménière’s disease trial has been enrolled at the Norfolk and Norwich University Hospital (NNUH).

There is currently no cure for Ménière’s disease, a rare disorder affecting the inner ear which can often cause crippling vertigo, tinnitus and hearing loss. As well as physical symptoms, sufferers can also experience a knock to their confidence which can significantly limit them socially.

A pioneering new treatment being tested, known as OTO-104, aims to reduce and even eliminate the physical symptoms meaning those treated could go on to lead completely normal lives. The current phase three trial involves one dose of either the OTO-104 gel or a placebo (this is not revealed until after the trial has concluded) being injected into the affected ear of the patient following a local anaesthetic.

The study which is funded by biopharmaceutical company, Otonomy is taking place at NHS Trusts across the UK, as well as medical organisations in Europe and the United States. OTO-104 has previously been tested on a small number of patients as part of a phase two trial. Participants of this stage also received the drug by injection into their inner ear, but with four doses given instead, and the trial had extremely positive results.

Mr Colin Breeze took part in the previous phase of the trial last year and his Ménière’s Disease symptoms were greatly reduced.

He said recently “I’ve had nothing but the best of health since participating in the clinical trial, not even the remotest of spells of vertigo or sickness, or even a light headed moment and I’m so grateful to be free from that awful Meniere’s disease.”

This enrolment is a great achievement for the ENT team at NNUH which is led by Consultant Surgeon, Mr John Phillips and Research Nurse, Catherine Wright.

Mr Phillips, who is leading the trial in the UK, said, “This European first is a proud achievement and clear indicator of the efficiency with which we’re able to carry out NHS research here at the N&N and in the Eastern region. However, without the patients and public who get involved, we couldn’t carry out this research to find better treatments so we are extremely grateful to all who participate.”

Catherine said “Meniere’s can be considered a hidden disability which is sometimes misunderstood in the general community. I have met many sufferers through this trial and they are grateful for a chance to alleviate their symptoms, to help others in the future and generate more public awareness about how debilitating it can be.”

This third phase of the study will test the drug on a much wider number of participants with recruitment due to conclude in 2017.

For more information, please visit the study website at http://www.menieresstudy.uk/ or for information on the trial at NNUH please email catherine.wright@nnuh.nhs.uk. 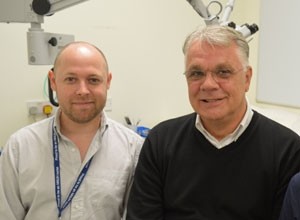