DMD Installations alongside Brad and Debbie McLean from Wymondham, whose little boy died at the age of 18 months, has supported the hospital which provided them with care where he was first born.

The family set up The Stanley McLean Trust in his memory and so far have raised over £80,000 for charity. The most recent golf day was held on the 26th April 2016 at Marriott Sprowston Manor Hotel and Country Club raising enough money to purchase two sleep apnoea monitors for the department.

Stanley was born on January 2, 2011, at the Norfolk and Norwich University Hospital with a heart condition called tetraology of fallots, further complicated by a missing pulmonary valve.

Stanley underwent heart surgery when he was eight days old at Great Ormond Street Hospital in London, and after three months of being in hospital, his parents were able to bring him home.

When he was five months old, his condition deteriorated and he had surgery– this time a risky eight hour operation from which took him a month to recover.

In July 2012, Stanley underwent surgery again after a routine check showed the conduit in his heart was becoming narrowed.

Complications occurred and he died shortly after surgery.

Brad said: “This is the second annual golf day that Dean and DMD Installations have organised, and we continue to be amazed at the kindness and generosity of everyone involved. We personally want to thank Dean as well as Charlotte Mace for organising and sponsoring this day and for making it such a success.”

Louise Cook, NNUH Fundraising Manager, said: “We’re really grateful to Brad, Debbie and Dean and all the team at DMD Installations for raising funds in memory of Stanley for the Jenny Lind department. Jenny Lind covers our Neonatal Intensive Care Unit as well as our children’s ward Buxton so the donation will be beneficial to many babies and children. The sleep apnoea monitors will make a real difference to the babies and children on both of the wards.”

Dean Peruzzi, Managing Director of DMD Installation commented: “We wanted to support the Stanley McLean Trust and our colleagues have experienced first-hand the great work the staff on NICU do so we wanted to give back. We really enjoyed the golf day and are looking forward to next year’s event on the 28th April 2017”

For more about The Stanley Mclean Trust visit http://thestanleymcleantrust.blogspot.co.uk/ 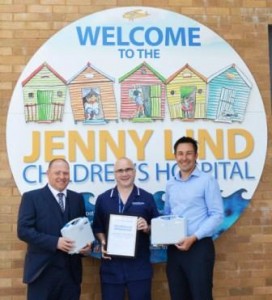