A new treatment programme for Clostridium difficile (C.diff) is being announced this week during International Infection Prevention Awareness Week 17-21 October.

In the last year, the lives of 20 patients diagnosed with C. diff, a bacterium that infects the gut, have been transformed by the Norfolk and Norwich University Hospital by the use of Faecal Microbiota Transplant (FMT). Following national guidance from NICE, the hospital started a pilot scheme in August 2015 in partnership with the Institute of Food Research. This treatment has had a 90% success rate.

Dr Ngozi Elumogo, Consultant Microbiologist and Director of Infection Prevention and Control at NNUH, says: “Community acquired C. diff rates are increasing nationally as people are living longer, often with multiple illnesses, and need recurrent treatment with antibiotics or have weakened immune systems. These patients are often admitted to hospital due to severity of their symptoms, upon admission they are isolated in side rooms with infection control precautions to prevent the spread of the infection.

“Prior to this new treatment, the only options for treatment were antibiotics. Paradoxically antibiotics are the biggest risk factor for developing C. diff infection. It is therefore unsurprising that up to a third of C. diff patients treated with antibiotics experienced relapses thus setting up a cycle of recurrence . We have successfully treated 20 patients with severe and relapsing C. diff so for the first time we can start to talk about a cure for C. diff which is a really exciting development. We now hope to expand this service to patients across Norfolk and Suffolk.”

“This new treatment is effective because it restores healthy gut bacteria. It is a natural product which is very well tolerated with no significant side effects. It also delivers considerable cost savings as well as delivering a higher cure rate for patients compared to the use of antibiotics.”

Professor Arjan Narbad from the Institute of Food Research says: “This process involves extensive screening of healthy volunteer donors in addition to the actual transplant procedure and clinical follow-up. We are also monitoring and analysing patients’ and donors’ gut microbe populations, or microbiomes, before and after treatment to measure how well the donor microbiome survives. This will help to improve this procedure further.”

Dr Ian Beales, consultant gastroenterologist at NNUH, says ” The availability of this new treatment, genuinely provides new hope to patients with very disabling symptoms. Faecal transplant is a low-cost, low-risk, highly effective treatment. Many patients and their relatives have already heard about this treatment and are very positive about the benefits and we are delighted that we can now provide this for them.”

C diff is a bacterium which lives in the gastrointestinal tract without causing disease and is normally kept in check by the many millions of other “healthy” bacteria in the gut. However when this normal healthy balance is disturbed by antibiotics or ill-health. C. diff can cause disease which varies from mild diarrhoea to severe life threatening sepsis.

The transplant involves faecal material, or stool, collected from a healthy donor screened and confirmed free from infections by the NHS microbiology lab run by the Eastern Pathology Alliance. It is mixed with saline and administered, filtered and infused via a fine tube placed into the stomach or small bowel through the nose. It can also be directly applied to the colon or large bowel via an endoscope. This new service is the result of successful multi-disciplinary collaboration combining the skills of hospital consultants and lab staff and scientists at the Institute of Food Research.

Case study
Mrs Valerie Rowe, aged 67, from Mulbarton became ill in August 2015 with ulcerative colitis and she lost three stone in weight in a matter of months. She was diagnosed with C. diff, which she had contracted in the community, along with other health conditions and spent 13 weeks in hospital at NNUH as her health deteriorated.

Mrs Rowe said: “I became very ill and spent many weeks in hospital, but I’m a fighter and managed to pull through.”

Part of Mrs Rowe’s medical treatment involved a faecal transplant to treat the C. diff infection. She said: “The treatment took just 20 minutes and I hardly felt a thing. Before the procedure I was slightly anxious but there was really nothing to worry about. Now my health is 100% better.” 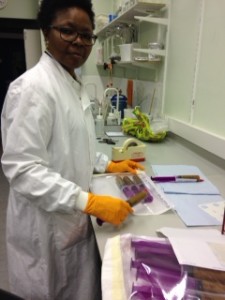 Dr Ngozi Elumogo in the laboratory