A consultant and specialist nurse from the Norfolk and Norwich University Hospital have been recognised with national awards at two separate parliamentary receptions.

In a ceremony held at Portcullis House, Kit Tranter, Lead Paediatric Rheumatology Nurse Specialist at NNUH, was presented with her Award by UK Prime Minister Theresa May. The award was presented on behalf of the National Rheumatoid Arthritis Society (NRAS) and Rt Hon. Theresa May is the founding patron of NRAS.

Having been nominated as an NRAS Healthcare Champion for her work on juvenile idiopathic arthritis (JIA), by one of the families she continues to care for at NNUH, Kit was delighted to receive a letter informing her of the nomination.

She said: “The award was a complete surprise and I wasn’t aware who had nominated me until the night of the Awards. It made it all the more special to know it was a family who had taken the time to put my name forward. I’m really passionate about the specialist service we provide as the Paediatric Rheumatology team at NNUH and thoroughly enjoy working with the families who require support.”

Paediatric rheumatology aims to treat a variety of joint, muscle and bone disorders and connective tissue diseases in patients up to 18 years of age. Kit is part of a team of 20 specialist paediatric nurses in the Jenny Lind Children’s Department who cover a variety of long term conditions and liaise closely with teams in the community to provide services across the region.

Emma McKay, NNUH Director of Nursing said: “This is a fantastic achievement for Kit and is testament to the highly skilled, specialised nurses we have here at NNUH. The Paediatric Rheumatology service provides outstanding care for our younger patients who suffer from conditions more commonly associated with older age, and I am delighted that Kit’s hard work in this area of specialism has been recognised.”

Dr Karl Gaffney, Consultant Rheumatologist at NNUH received his ‘Undercover Hero’ award at the National Ankylosing Spondylitis Society’s (NASS) inaugural Patient Choice Awards. Karl received the first award of the night having been nominated by patients, colleagues and NASS staff. As chair of the NASS medical advisory board and NASS trustee, Karl went on to present awards to nine other healthcare professionals.

The evening also saw the launch of the NASS campaign to ask MPs to pledge their support for the implementation of the upcoming NICE Clinical Guidelines for Spondyloarthritis. Local MP for South Norfolk, Richard Bacon, attended the event and committed his support for the campaign.

Dr Karl Gaffney said: “The event at the Houses of Parliament was fantastic and it was great to be among dedicated professionals who work so hard to raise disease awareness and improve standards of care and research. It was an honour to present awards to inspirational colleagues on the night and I would like to pass on my sincere thanks to all those who nominated me.”

Dr Karl Gaffney has been a Consultant Rheumatologist in Norwich since 1995 where he has established a large multidisciplinary service for more than 1000 patients with axial spondyloarthritis (including ankylosing spondylitis). He is an honorary reader at Norwich Medical School and leads an extensive research programme on epidemiology, disease awareness and clinical trials.

Dr Frankie Swords, Chief of Division for Medicine at NNUH congratulated Kit and Karl on their awards: “This is a great achievement for Kit, Karl and the wider Rheumatology teams here at NNUH. To be recognised and nominated by those we care for as medical professionals is really special and this is a wonderful acknowledgement of the specialist expertise of our staff and services at NNUH.” 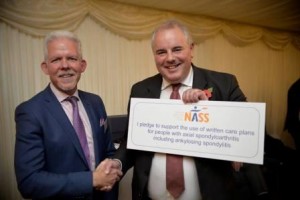 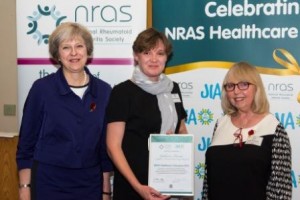