A gift has been made to the maternity ward at the Norfolk and Norwich University Hospital, which helps to monitor a baby’s heartbeat during labour. The wireless fetal heart monitor was presented on Tuesday 1st November  at the hospital chapel, by local charity Norfolk Sands.

The monitor was officially presented by Laura and Tom Burdett, from Wymondham, who organised the event which raised £8,300 for the monitor after the loss of their first baby.

Used to monitor a baby’s heartbeat, the wireless fetal heart monitor allows the mother freedom to move around during labour, helping relieve discomfort and reducing the likelihood of needing intervention to assist the birth. In ‘high risk’ pregnancies, fetal heart monitoring can give an early warning of any complications, which could save babies’ lives. It can also be a great reassurance to parents who have previously experienced loss through stillbirth.

Frances Bolger, Head of Women’s and Midwifery at NNUH, said: “Wireless telemetry is fantastic new technology that allows higher risk women the ability to keep upright and mobile during labour whilst allowing continuous monitoring of the fetal heart. To be in a position to be able to encourage upright labour and birth, whilst having the reassurance that we can monitor the fetal heart will hopefully lead to an improvement in the patient’s experience. This is the second wireless monitor which we have been given from SANDS and we are incredibly grateful for their continued support.”

Norfolk Sands is a local branch of UK Sands, the Stillbirth and Neonatal Death Society, a charity which supports anyone affected by the death of a baby before or shortly after birth. 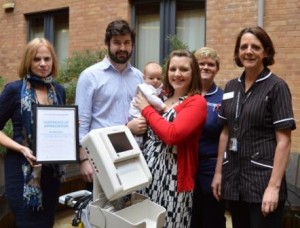