A Norfolk couple, whose daughter contracted life-threatening sepsis, have lent their wholehearted support to a research trial that aims to reduce the risk of infection in premature babies.

When Lily-Rose Davies was born nine years ago, she was 14 weeks early and weighed just 400g. She is the lightest baby ever to have survived in the Neonatal Intensive Care Unit (NICU) of the Norfolk and Norwich University Hospital (NNUH).

However, just two weeks after being born prematurely at 26 weeks gestation, Lily-Rose contracted an infection, which left her battling for her life.

Although she eventually pulled through, the sepsis left her with permanent damage to her brain and loss of all the toes on her right foot.

Her parents, Louise and Dan, have given their full support to a research trial that aims to reduce the risk of premature babies getting sepsis.

The parents of more than 100 babies treated at the hospital’s NICU and Medway NHS Foundation Trust in Kent opted to take part in the ARCTIC study, which is comparing the safety and effectiveness of two antiseptics for cleaning the skin of babies prior to central venous catheter insertion. 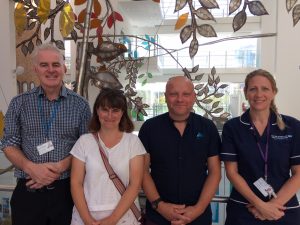 Louise and Dan Davies with Paul Clarke and Amy Nichols.

Dan said it was a “nightmare” to see Lily-Rose become seriously unwell with sepsis so quickly.

He said: “It was an awful experience to get that call from NICU asking us to come back to the hospital urgently. No matter how well the call was worded, we arrived to see medical staff around her incubator.

Anything that can be done to learn from this experience such as this trial to reduce the risk will always have our 100 per cent backing.”

The ARCTIC trial (Antiseptic Randomised Controlled Trial for Insertion of Catheters) was launched in March 2017 and is funded by the National Institute for Health Research’s (NIHR) Research for Patient Benefit programme.

Professor Paul Clarke, NNUH consultant neonatologist and honorary professor of the UEA, is the chief investigator leading the study and has been working on the project for the last six years. He said there is currently no national best practice guidance to help NICUs across the country know which antiseptic should be used for premature babies. Currently there are at least seven different antiseptics being used in UK NICUs, and all have different concentrations and constituents. 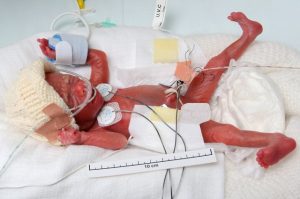 Lily-Rose weighed just 400g when she was born

Prof Clarke said he hoped that the trial results will indicate that it may possible to achieve better skin disinfection by using stronger antiseptic solutions to clean the skin before feeding catheters are placed, and that such antiseptics can be used safely in premature babies. The ARCTIC feasibility trial results will be available in 2019 and it is hoped that it will pave the way for a larger multicentre trial to find out which is the best antiseptic to use.

Prof Clarke added that Lily-Rose “is a little miracle to have pulled through her infection. It is truly wonderful that she managed to survive, although this is clouded by the significant and real ongoing difficulties Lily-Rose and her family have to face in their everyday lives by what the sepsis left in its wake. Lily-Rose highlights the vital importance of our research trial to try to stop future babies suffering similar dangerous infections.”

“We do a lot of research here to try to keep at the forefront of neonatal care. Everything we are doing with our research involving babies is trying to work out what is better for babies and what treatments may help them to survive as healthily as possible. We can only move forward if we do research. And we are really grateful to all the parents who generously allow their babies to participate in these important research studies.” 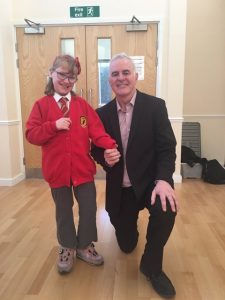