A new research study has been launched that could reduce the number of treatments for patients with advanced skin cancer.

The Oncology Team at the Norfolk and Norwich University Hospital (NNUH) has begun the DANTE clinical trial to help patients who are receiving immunotherapy to treat inoperable melanoma. 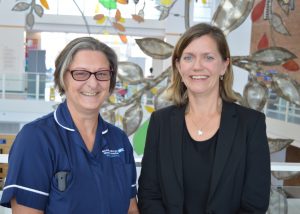 Immunotherapy drugs help the immune system to recognise and attack cancerous cells to control or shrink the cancer. While immunotherapy appears to be most effective in the first year, some patients with skin cancer have received the treatment for more than two years. The new trial, funded by the National Institute for Health Research (NIHR), will find out whether stopping immunotherapy after a year is as effective at controlling the cancer as treatments over a longer period.

Dr Jenny Nobes, Consultant Oncologist, said immunotherapy drugs appear to be most effective in the first year of treatment.

She added that stopping treatment after 12 months could still control metastatic melanoma and would lower the risk of side effects.

Patients who volunteer to take part in DANTE would have the option of restarting immunotherapy if their cancer became more active again.

Dr Nobes said: “Immunotherapy can have a big impact on different cancers and it was first used in melanomas. It gets the body’s defence system to start fighting the melanoma. The prognosis for advanced melanoma was often less than six months. However, immunotherapy can extend this to many years.

With immunotherapy, patients come to the hospital every two or three weeks and there are some people who have been on it for three years.

We do not want to continue it for longer than we have to. In the US they stop immunotherapy after a year and can restart when they want to, but we are more restricted by NHS funding rules.”

Around 50 patients a year are treated for advanced melanoma at NNUH.

The national study aims to involve 1,200 patients over the next five years and is being organised by the University of Leeds and sponsored by Sheffield Teaching Hospitals NHS Foundation Trust.