‘Miles for Sarah’ marathon challenge is a real success 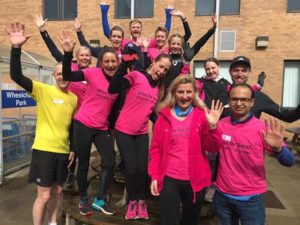 team effort has helped an NNUH doctor complete her marathon challenge after a stroke meant she was unable to run in the London race.

Sarah Knapp, a senior registrar in the hospital’s maternity department, had been planning to take part in the London Marathon but suffered a stroke after collapsing at her running club.

Sarah’s family, friends and colleagues then stepped in by organising a ‘Miles for Sarah’ marathon challenge in the grounds of the hospital on Sunday, with each person running or walking a mile to help Sarah’s fundraising.

More than 90 people took part by either striding out in the hospital grounds, nearer their home, or even in Australia!

Sarah herself ran the final mile in the hospital marathon challenge and sent messages of support to her training partners, Amanda Anderson and Helen Bowen, who were running in the London Marathon on Sunday.

The Miles for Sarah marathon was organised by midwives Jo Knox, Mel Applegate and Kylie Burke, with the help of Sarah’s sister Hannah.

Jo said: “It was very emotional. We had 95 runners involved, it was a lot more than we expected! We had planned to have 26 of us and each run a mile.

“At the moment we have raised £3,000 on our fundraising site which is quite phenomenal. £800 will go to the maternity fund, part of the N&N Hospitals Charity, and the remainder will go to Heads Together. It was fantastic that Sarah managed to run the last mile and even did an incredible sprint finish. I was so impressed.”

Sarah said: “Discovering that I’d had a stroke was such a shock, especially as I was the fittest I had ever been. However, the love and support that I have received from colleagues, friends and family has been overwhelming. I am so grateful to everyone who took part and I hope we can raise as much money as possible for Heads Together and the NNUH maternity fund.”

If you wish to donate to this fundraiser, click on https://uk.virginmoneygiving.com/fundraiser-display/showROFundraiserPage?userUrl=JoKnox2&pageUrl=1