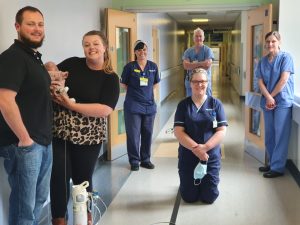 Last week was a very special week for a Norfolk family who have taken home their daughter Lilly who was born more than four months prematurely.

This was equally momentous for the staff of the Norfolk and Norwich University Hospital Neonatal Intensive Care Unit (NICU) as Lilly Rae is now the most premature-born baby that the team has ever cared for who has survived to go home.

Tayla Menear, 26, gave birth to Lilly on 9 December 2019 at just 22 weeks and 2 days gestation. But despite weighing in at just 511 g, Lilly proved to be a fighter from the start as she was born with a heart rate and some breathing efforts.

Dedicated, expert care in treating such a tiny baby meant Tayla and her partner Shane Rumbles were finally able to go home with Lilly for the first time to start the next stage of their remarkable journey together as a family.

Leaving the ward on Tuesday Mum Tayla said: “I cannot believe this day has come. We never dared hope that this could happen. I still don’t think I will believe it until Lilly is tucked up in her Moses basket at home with me and Shane.”

NNUH Chief Executive Sam Higginson said: “I am absolutely delighted that Lilly has made such good progress and that she has been able to go home. These have been challenging times for Tayla and Shane and I wish them all the joy in the world.

I also pay tribute to our extremely talented NICU team who have looked after Lilly so well over the last four months. They too must take great joy from this.”

Lilly came out with a beating heart but very little breathing and movements, as expected for a baby born so early. The NICU team led by Consultant Neonatologist Dr Priya Muthukumar was ready and waiting in the delivery room to stabilise her before admission to NICU.

For just over four months a large team of nurses and doctors have looked after Lilly round the clock to give her the care needed to help her overcome some major hurdles, including three serious infections, a bleed on her brain and having to undergo major surgery.

Tayla was just 21 weeks and 4 days into her pregnancy when admitted to hospital with suspected infection, broken waters (ruptured membranes) and threatened preterm labour. The NICU team told Tayla that they would aim to be present at birth to assess her baby, but that if she delivered before 22 weeks it was very unlikely they would be able to provide any active intervention to save her, and that even if she delivered after 22 weeks the chances of survival with intervention were not high..

Lilly proved to be a fighter from the start; her heart rate was detected at birth and she was quickly stabilised by the attending senior neonatal team who passed a small tube into her tiny airway to help her breathing efforts.

After seven weeks she finally came off the ventilator. She had several life-threatening infections which needed to be treated with antibiotics. She had an episode of gut obstruction caused by curdled milk, and at almost three months of age needed to undergo a major surgical operation on a distended intestine.

And in the midst of all this, Coronavirus struck meaning Tayla and Shane could no longer visit their daughter together or for very long. With only one parent allowed by her side, Tayla visited the hospital on a daily basis for two hours each day while Shane remained at home.

Tayla said: “It has been one of the hardest parts of our journey. Me and Shane have supported each other from the moment I went into hospital at 21+4 weeks pregnant.  Going through everything together and then suddenly having to do it alone has been really hard.”

Shane, 29,  added: “It has been hard, especially because I have not been seeing Lilly.  We used to talk everything through together on the way back from the NICU each day.

Tayla said: “Me and Shane have both been able to complete the majority of care for Lilly including tube feeds, mouth care, changing her nappy and clothes. I have been going up to the hospital each day and I have taken lots of videos, photos, and Shane and I [?] have lots of video calls.”

While Tayla and Shane are able to look after Lilly now, it was a month before they were even able to hold Lilly.

Tayla said: “I thought I would be scared holding Lilly as she was so fragile, but from the moment she was born I needed to touch and hold her. So when the nurse suggested holding her for the first time I was far too excited to feel scared.”

Shane added: “I felt excited but terrified to hold Lilly. It took a few more weeks before I held Lilly for the first time.”

Lilly has gone from strength to strength and on the 11th April Tayla, Shane and their NICU team celebrated Lilly’s original due date.

And Shane and Tayla have been able to see Lilly develop further.

Tayla said: “We took each day as it came and watched as she continued to improve. Each improvement was a sign that she was becoming more comfortable and settled.  She reacts to my voice and will open her eyes when I come in and talk to her. She gives me big beautiful smiles (even if they are wind!).”

Tayla and Shane never dared prepare for Lilly to go home, so it was a revelation to receive the news just a fortnight ago that if all continued to be well, Lilly would be able to go home.

Then on Tuesday morning Tayla and Shane had a call from Lilly’s neonatal nurse to say she could be discharged home that day.

Tayla said:  “It was complete disbelief. For the first few months of Lilly’s life no-one knew if we would ever reach the point of going home as a family. Then Coronavirus made this stressful situation even worse. There have been several things we have not yet been able to do with Lilly together that I didn’t want Shane to miss out on, so once the outreach team have made sure everything is OK at home we will give Lilly a bath together.”

Lilly will continue to receive ongoing support from the NICU team, including from specialist neonatal outreach nurses who will visit her regularly at home, and from Dr Priya Muthukumar, who is Lilly’s named consultant neonatologist.

Dr Muthukumar said: “It is too early to predict exactly what Lilly’s long term outcome will be, as we know babies born so prematurely are at higher risk of future developmental issues. Nevertheless, we are reasonably optimistic for Lilly because her brain scans while in the neonatal unit have been reassuring and she has made very encouraging progress so far.”

Dr Muthukumar in her additional role as the service Director for NICU paid special tributes to the nursing team ,  her colleagues including Dr Paul Clarke, Neonatologist, who counselled the parents prior to delivery and the  obstetric team: “Their active monitoring of Tayla in the days before Lilly was born and the drugs they gave Tayla during labour to help mature Lilly’s lungs and help protect her brain, meant she was given the optimal chance of being in a good condition at birth and the best chance for survival.” Dr Muthukumar also paid tribute to the paediatric surgical team who did the timely lifesaving abdominal surgery during her stay in NICU.

Dr Muthukumar added: “That first hour is vitally important and having a senior team present for delivery meant we could make the decisions and take action immediately which makes a huge difference to both immediate and long-term outcome.  “In terms of her longer prognosis, it’s looking pretty good.”

Tayla said: “I found a quote that said: ‘I never knew the NICU existed until my baby could not live without it.’ This is so true. I didn’t either. I couldn’t find anything about premature babies born this early and felt very alone. I just wanted one example. Before Lilly’s birth, Dr Clarke had mentioned that their NICU had only ever seen one previous baby born at 22 weeks survive, a little boy born the previous year. I have since come across other cases and now want people to know if they go into labour at 22 weeks not to feel hopeless.  There is always a chance.”

She added: “I want to thank Priya – she effectively saved her life – and the whole NICU team. What they have done has been incredible. I want everyone to know just how brilliant they are.

“What we have been through is awful, but we owe all the staff at the Norfolk and Norwich Hospital Neonatal Intensive Care Unit everything – for saving our little 22 week miracle.”